Offering a transparent display and the ability to watch movies and play games wherever you like, the Nreal Air could be the first pair of smart glasses you’ll actually want to buy 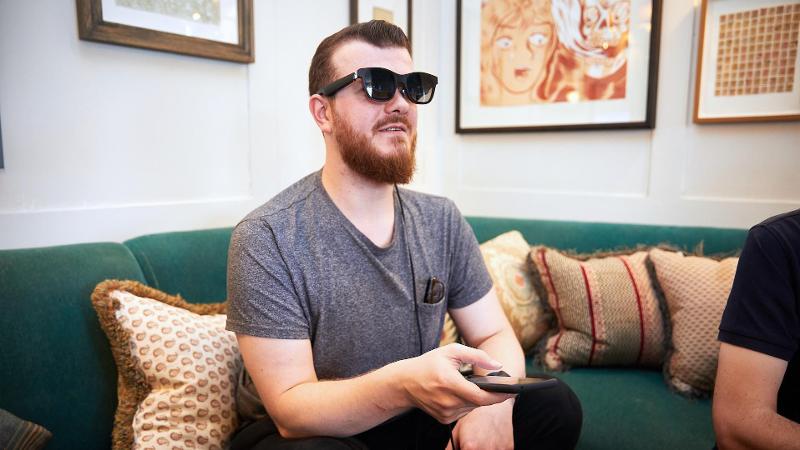 Smart glasses come in all shapes and sizes, from the camera-enabled Ray-Ban Stories to audio-focused glasses like the Soundcore Frames, but none offer that Sci-fi mixed reality experience from futuristic Hollywood blockbusters – until now, anyway.

While they’re not quite at the level of Tony Stark’s eyewear, the Nreal Air glasses put a transparent 130in display in front of your eyes, allowing you to access sites, watch movies and play games via a pair of glasses that weigh just 79g.

The Nreal Air will likely be the first pair of smart glasses you’ll want to buy – and they’re coming to the UK via EE very soon.

The first thing you’ll notice about the Nreal Air is just how low-key they look. The design is reminiscent of high-end sunglasses, with a combination of black plastic and a flash of silver aluminium that doesn’t draw attention to itself – something that can’t be said of the futuristic HTC Vive Flow glasses.

It’s not quite as streamlined as Ray-Ban Stories, but in all fairness, Meta’s glasses don’t offer a built-in display, and the lack of outward-facing cameras helps give it an understated look. 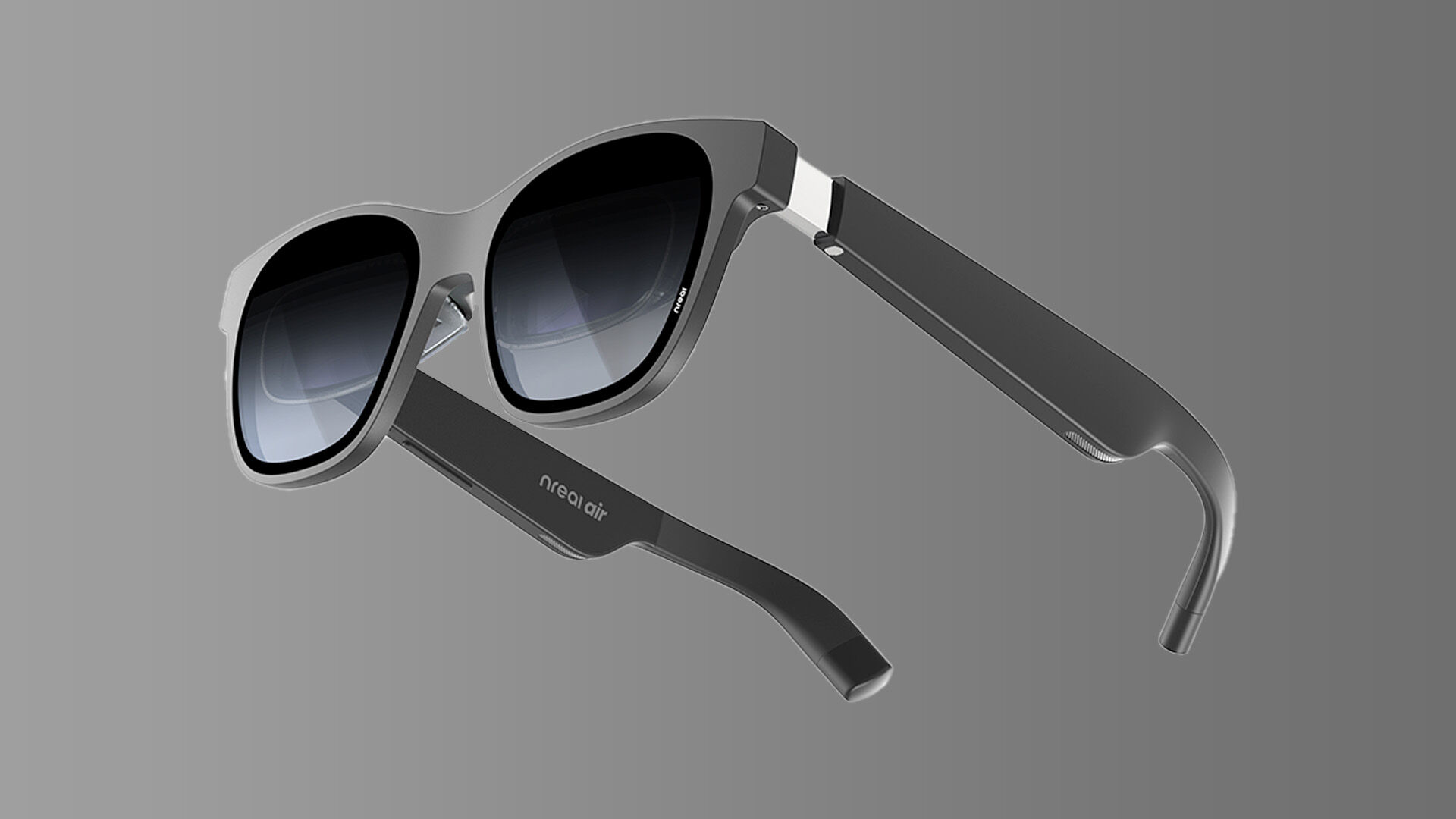 Crucially, that slimline design and lightweight 79g build mean the Nreal Air glasses are actually comfortable to wear over long periods, without the ache of front-heavy headsets or tight clamping as with some alternatives. They sit on your face just as a normal pair of sunglasses would, and while that may not sound like much, it’s a huge achievement for the Nreal team.

In fact, the only real tell-tale signs that they’re not regular glasses are the cable that runs from the back of the glasses to your smartphone, and the embedded displays within the lenses.

Powered by your smartphone

The reason why Nreal’s smart glasses are so lightweight and comfortable to wear is that most of the smarts and power come from a connected smartphone and not the headset itself.

Compatible with a suite of USB-C connected Android smartphones, your smartphone doubles up as a controller to use with the headset. Some may see it as inconvenient, but it saves you from carrying around a separate controller to use the glasses. The only disappointment is that, without a USB-C port, iPhone owners are left in the cold.

Rather than being a one-size-fits-all headset with all the bells and whistles of mixed reality headsets like Microsoft’s HoloLens 2, the Nreal Air focus on entertainment. 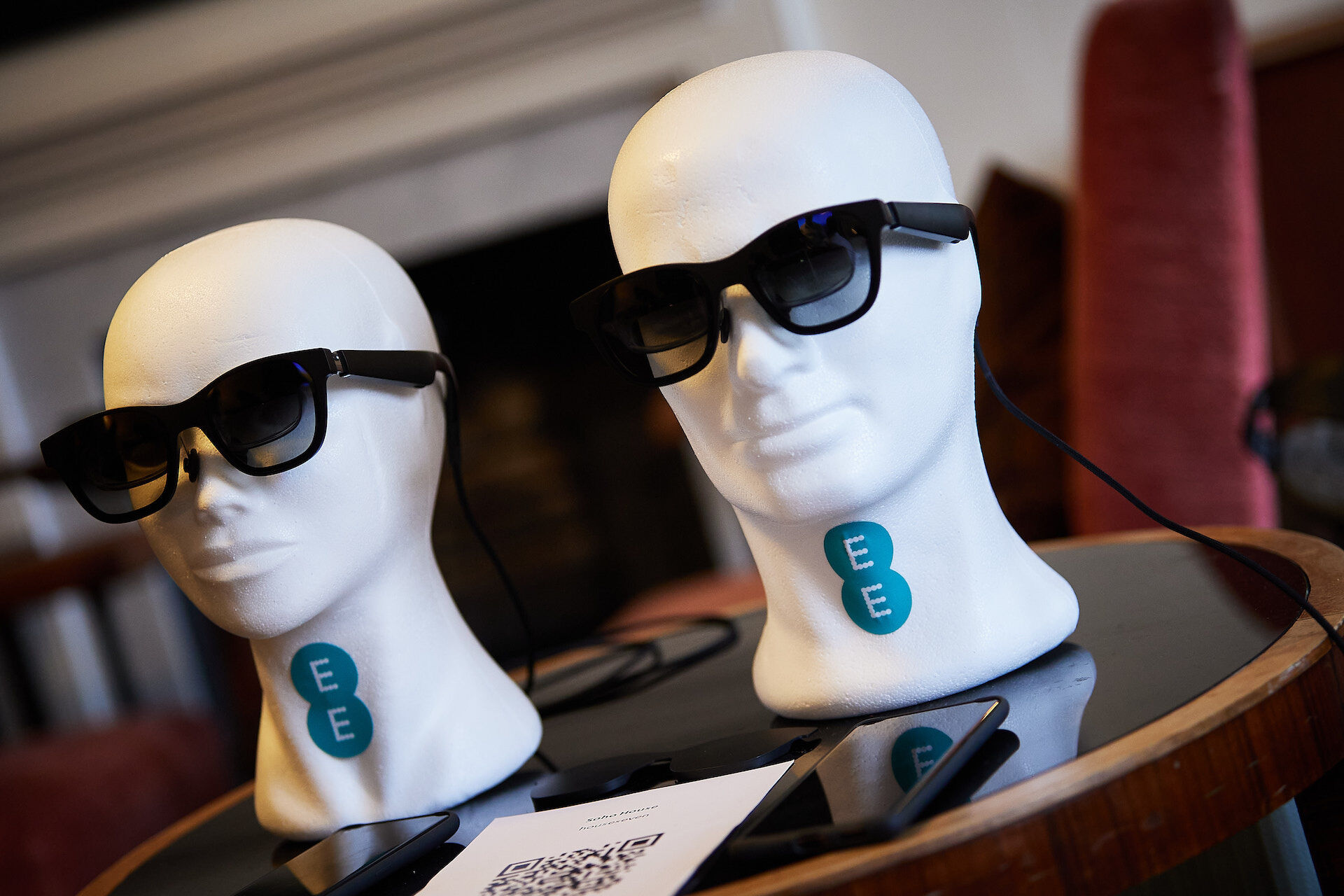 Via the large virtual 130in display the smart glasses offer, you can watch movies via apps like Netflix and Display+ via your smartphone, browse websites, watch live sports and even play cloud-based games via apps like Xbox Game Pass.

It’s lightweight enough to be used when travelling, powered by EE’s 5G network, allowing you to don the headset and watch the football or your favourite streamer when out and about. 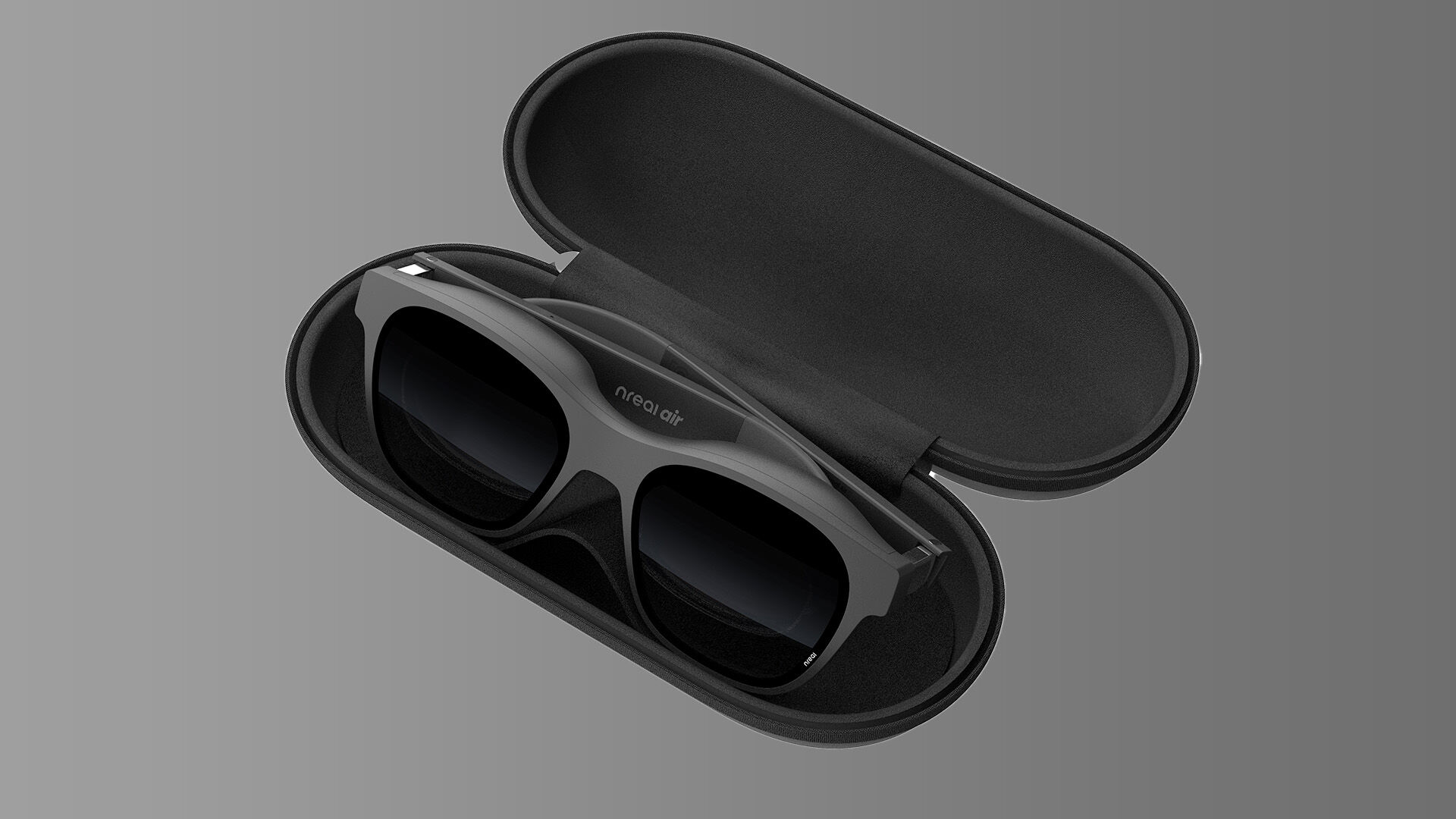 Our first glimpse at a mixed reality future

Where the Nreal Air stand out from the likes of the Vive Flow is in the display department. Rather than offering a blacked-out display like most VR headsets, the displays within the Nreal Air are transparent, allowing you to keep track of what’s going on in the real world.

It provides a cool mixed reality effect, with virtual windows overlayed onto the physical space – though, without outward-facing cameras, it can’t actually map the space and make AR elements interact with the real world.

Still, it’s a genuinely exciting experience that left me saying ‘wow’ when I first donned the glasses at EE’s UK launch event in London earlier this week.

It has two operating modes – MR Space and Air Casting. The MR Space is impressive, with a slick AR interface that lets you open multiple windows – be it sites like Twitter or web-based video players like YouTube – side-by-side. You can easily move, resize and even the distance between you and the display, adding extra depth to the mixed-reality experience.

Air Casting is, essentially what it says on the tin, mirroring your smartphone on a 130in virtual display. You can browse apps like Instagram and Facebook to your heart’s content, but it shines best when using apps like Netflix or BT Sport. 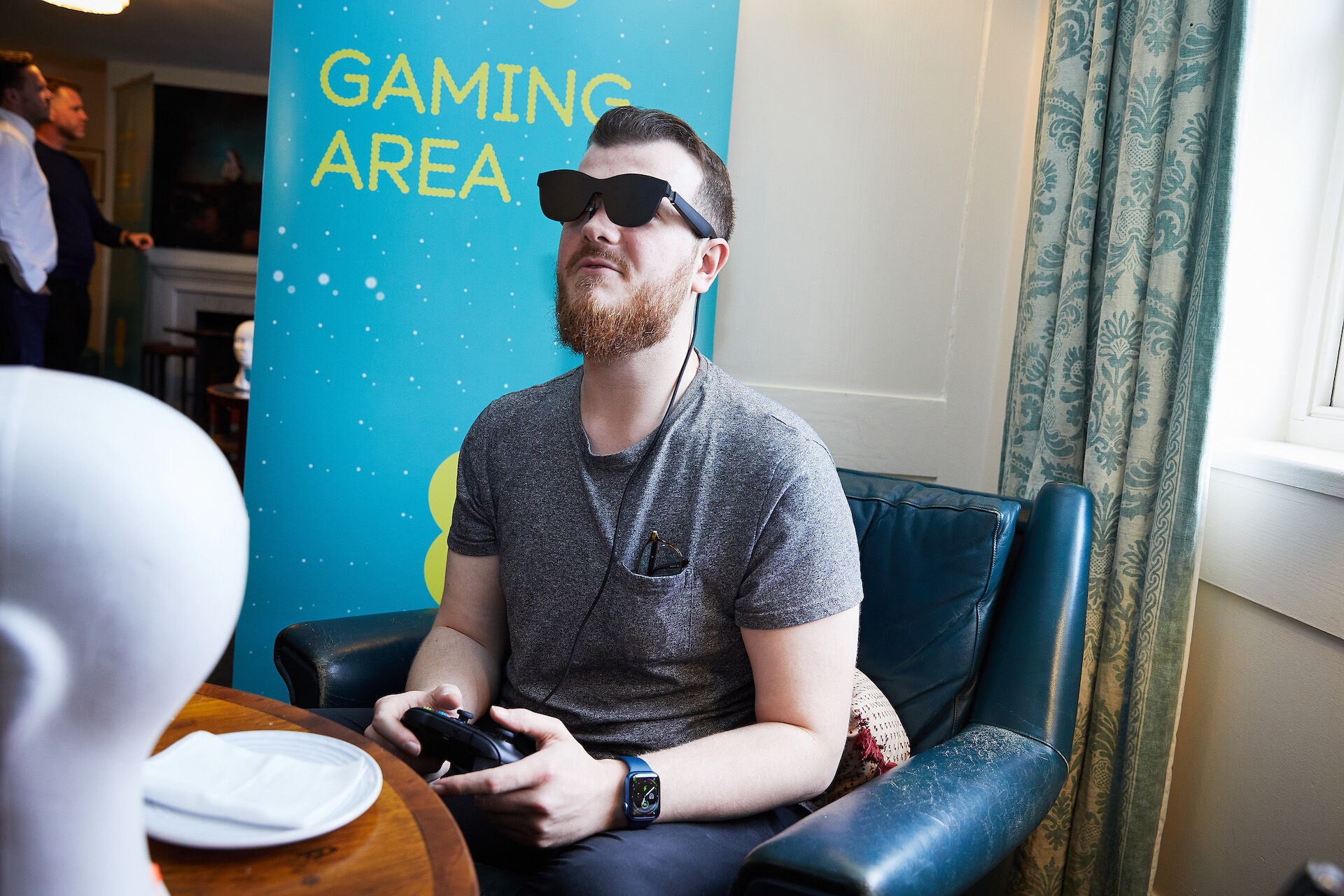 It’s also where you’ll be able to play your favourite mobile and cloud-based games and, I suspect, where many users will spend most of their time.

And, if you do want a more immersive viewing experience when watching content, simply snap on the black glasses cover to black out the background.

They’re coming to the UK via EE

If the idea is exciting, you’ll be happy to know that they’re about to get much easier to buy, with Nreal Air smart glasses officially set for release on 20 May 2022 in the UK via EE and its ever-expanding 5G network.

The Nreal Air glasses will cost £399.99 outright, but existing EE customers can get access via EE’s Add to Plan service to spread the cost interest-free. It’ll cost £10 upfront and an additional £35 a month for 11 months, and those interested can register their interest via the EE website right now.

Those in the US can head to Verizon, where you can already pick up the smart glasses for $599.99.

Are you excited about Nreal’s Air glasses? Or do you think augmented reality is a fad? Let us know on Twitter.