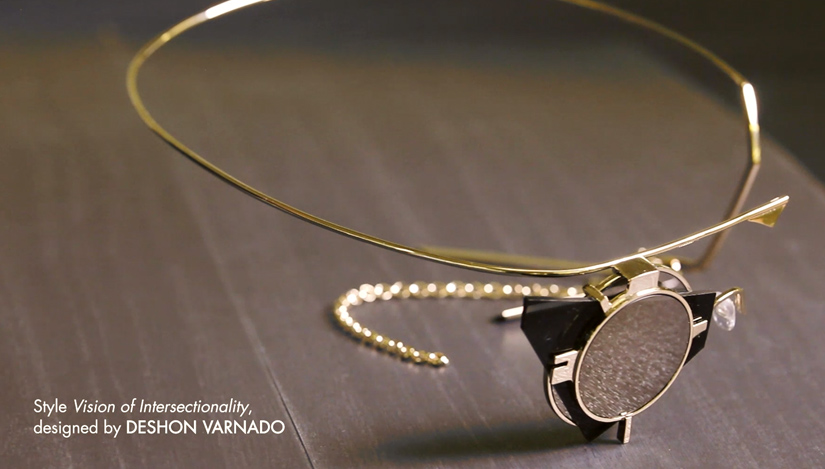 Safilo Group and The New School’s Parsons School of Design announced the winner of the second installment of the Safilo x Parsons Design Thesis Competition on Monday, May 21st at the 70th Parsons Benefit gala which took place at Pier 60 in New York City. The benefit honors members of the greater design and performance community who exemplify the school’s mission while raising scholarship funds to support students throughout The New School.

Déshon Varnado, whose thesis was entitled Visions of Intersectionality, was announced as the winner of the Safilo x Parsons Design Thesis Competition and congratulated on stage by Parsons’ Dean of Fashion, Burak Cakmak, and by Alessandro Marcer, VP, creative director and head of Safilo Group’s global design studio in New York, who coached the students for the second year in a row.

Déshon Varnado’s eyewear design prototype closed the high-impact student runway show, which additionally included the other five student eyewear creations that were part of this year’s Safilo x Parsons Design Thesis Competition, and was viewed by some of the most important names in fashion, art and culture, including, singer, songwriter, model and actress, Solange Knowles who was one of the evening’s honorees. 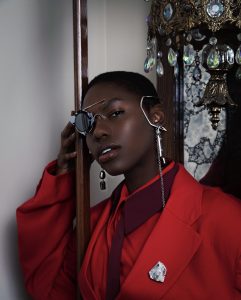 All six student eyewear prototypes were on display at the school last week during the Parsons Festival, an annual series of art and design events in which cutting-edge student works are presented to the Parsons community and the public. The Parsons Festival is part of NYCxDESIGN, New York City’s annual celebration of design. The event attracts hundreds of thousands of attendees and designers from across the globe and celebrates and showcases over a dozen design disciplines through events taking place across the city’s five boroughs.

First instituted during the 2016-2017 school year, this second installment of the Safilo x Parsons Fashion Design Thesis Competition again involves six thesis-level BFA students who are provided the opportunity to apply their design skills to a very specific accessory, such as eyewear, as a pivotal component of their final thesis work while being supported by Safilo, one of the top industry leaders in eyewear design and manufacturing. The competition enables the students to see their prototyped designs come to life with the
oversight of Parson’s School of Fashion faculty, Safilo’s design team and atelier in Italy which produced the student’s handmade prototypes.

Created as a celebration of up-and-coming designers of the next generation, the competition echoes Safilo Group’s purpose as a design inspired and brand led eyewear manufacturer. The program equips young designers with an in-depth study of the eyewear process and underscores eyewear product excellence.

Alessandro Marcer, VP, creative director and head of Safilo Group’s global design studio in New York, coached the students for the second year in a row and taught them about the different phases and technical aspects of the eyewear design process to perfect all functional and technical elements.

The Safilo x Parsons Design Thesis Competition builds not only on the value that Safilo places on eyewear and the company’s ongoing commitment to preserve eyewear craftsmanship, but also on Safilo’s commitment to educate younger generations by passing down the art of eyewear as the company has done with its Safilo Product School which was inaugurated in 2015 as an apprenticeship program.

The six student finalists chosen for this year’s program, among more than 50 senior candidates included: Che An Lin, Danchen Sun, Déshon Varnado, Ruree Lee, Yang Qiu and Mengzhu Li. In addition to the experience and seeing their creations prototyped, one winning student (Déshon Varnado) would also be the recipient of a cash prize from Safilo. The students’ completed projects are available to view online at www.galleriasafilo.com.