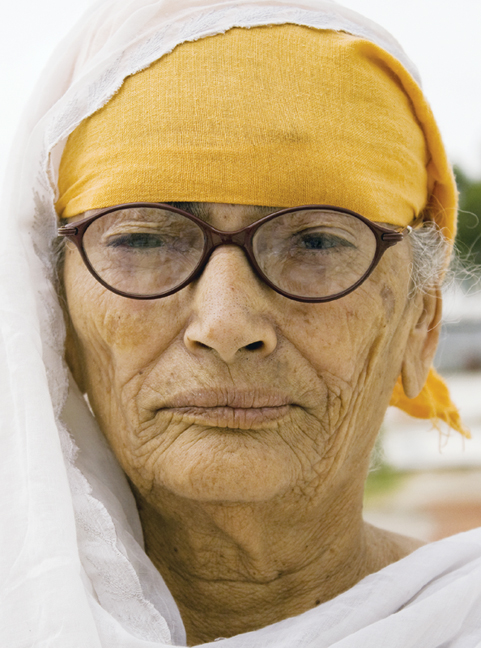 With a population just over 133,000, Abbotsford, BC, may not seem very large, but it is remarkably diverse.Beyond the large sections of the populace tracing their roots back to England and Scotland, over 21 per cent have German heritage and 20 per cent have ethnic ties to South Asia. Dr. Surjinder Sahota practices in the small Fraser Valley city and says ethnic South Asians make up about 10 to 15 per cent of her patients. Though she says her practice has “not changed much” over the years, some change has been inevitable. “You learn to change with the times,” says Dr. Sahota. The Abbotsford practice Complete EyeCare Optometry, in which she is a part of, has two Punjabi-speaking optometrists in addition to front-desk staff who also speak the language. “Key for us is our Punjabi-speaking optician who is able to explain progressives and the differences
between various lenses. The optometrist and current president of the British Columbia Association of Optometrists (BCAO) admits that the hiring of multilingual staff was a conscious move to build the practice. Making available informational material in languages other than English is also part of that effort. Through the BCAO, she provides brochures in Punjabi about eye health and children’s vision. Currently Dr. Sahota is also developing an in-office Punjabi-
language brochure to help explain her team’s OPTOS retinal imaging system to patients.
Dr. Sahota and her team have rightly placed special focus on language to better serve South Asians in Abbotsford. While 93 per cent of South Asian Canadians can converse in either English or French— interestingly English is an official language in many of the countries from which many ethnic South Asians hail, including India, Pakistan, Guyana, Fiji and Mauritius—65 per cent still speak another language at home.

In Edmonton, Dr. Neepun Sharma, O.D., speaks with some of his South Asian patients in either Hindi or Punjabi. Some of these patients do not have a good grasp of English, he says. For others, it is simply a matter of comfort. No matter the reason, being able to speak with them in the language of their choice is important. “With older patients, written material, while helpful, can overwhelm. Often they prefer having the chance to discuss the issues,” he says. “There is no substitute for one-on-one communication.”
Still, language is just one vehicle on the road to providing better health care to minority communities. “Fostering Healthy Sight in Canada: Focus on Culturally Diverse Groups,”
a 2010 study published by Transitions Optical, highlights the multi- dimensional issue of “culturally appropriate vision care.” And when it comes to providing culturally appropriate eye care to Canada’s growing South Asian communities— including people of Bangladeshi, East Indian, Pakistani and Sri Lankan descent—a wide-angle perspective that takes into consideration health risks and culture is key to mapping the way forward.
By 2031, visible minorities will comprise 32 per cent of all Canadians. The same percentage, estimates Statistics Canada, will have a mother tongue other than English or French. In some cities, the cultural mix will be at another level altogether: visible minorities will be 59 per cent of the population in Vancouver and 63 per cent in Toronto.

As the number of visible minorities grows, so does the prominence of South Asian Canadians. South Asians are already the largest visible minority group in
Canada. By 2031, the size of this ethnic group is expected to more than double, perhaps even triple, growing to between 3.2 million and 4.1 million from the 1.3 million recorded during the 2006 census. South Asians would then represent 28 per cent of all visible minorities and could reach 11.5 per cent of the total population.
As the population changes, health professionals in Canada are becoming increasingly aware of the health issues that are prevalent within different ethnic communities. That’s no different with the South Asian community.
According to Dr. Sahota, pterygia, pingueculae and old trachoma are prominent among South Asians due to exposure to UV rays and diseases in third-world countries. As a result, conjunctivitis and Dr.y eyes are very common.
It is the high incidence of heart disease, hypertension and diabetes within the South Asian community that has healthcare experts particularly concerned. A study published in the Canadian Medical Association Journal in 2010 reported that the risk for diabetes among South Asian immigrants to Ontario was three times higher than among newcomers from western Europe or North America, and also higher compared with long- term residents of Ontario.
“This risk becomes evident at an early age,” wrote the study’s authors, “suggesting that effective programs for prevention of diabetes should be developed and targeted to immigrants in all age groups.”
People with diabetes are more likely to develop cataracts at a younger age. The high incidence of diabetes, though, means the main risk is the development of diabetic retinopathy.
In Edmonton, Dr. Sharma has ventured beyond his optometric practice to teach diabetic patients that eye care should also be part of their health care regimen. As part of the team on the Canadian Diabetes Association’s South Asian Education Committee, he educates South Asians about different aspects of diabetic care, including the importance of annual eye exams. Educating the South Asian community, though, is more complex than one might imagine: it often means confronting hard-set attitudes and debunking myths.
Dr. Sharma describes patient education as an ongoing process.
“You must keep repeating the message that they must continue coming back for regular check-ups.” he says. “And you must be very communicative in the exam process: explaining what you are checking and why.”
A major reason for this is because preventative eye care is a foreign concept to many South Asian immigrants, as there is no attention given to it in their home countries. In fact, it is common for South Asian patients to only seek help when there is a problem, says Dr. Sahota in BC. With the well-ingrained misconception that 20/20 vision equates to “healthy eyes,” it is hard for eye care professionals to successfully explain eye diseases when there is often no pain or distressing symptoms.
Getting over this hurdle and having patients acknowledge the reality that diseases like glaucoma are insidious and can exist despite 20/20 vision is a challenge. Patients at risk need to be reminded of the statistics: South Asians have an increased incidence of glaucoma, a disease that affects 250,000 Canadians but where only 50 per cent know they have it; and even more Canadians have diabetic retinopathy, which is the most common cause of new blindness in North America.
“By the time a patient has vision loss, it’s irreversible. It is our job to make sure we educate our patients to understand the importance of a comprehensive eye exam. There is definitely negative stigma associated with wearing glasses in the South Asian community,” says Dr. Sahota. “Parents feel that it is their child’s fault and that glasses are a bad thing. They do not realize the need for and benefit of glasses—and some parents will get mad at their children for honestly not being able to see certain letters.”
Dr. Sharma has come across similar attitudes about eyeglasses while working with South Asian communities in Alberta.
“Many South Asian parents have a tough time accepting eyeglasses for their child, especially when the child is in grade three or lower,” he says. The optometrist says the stigma stems from myths that have been ingrained in them. For instance, Dr. Sharma has patients who think glasses will make their children’s eyes
weaker and believe that when a child has a problem, she will realize and ask for help.
Many others are convinced glasses are mostly for old people and no serious eye problems affect children.
These perceptions can be battled with facts, but Dr. Sharma admits it also takes a lot of persistence. One of the best ways to appeal to parents, though, is by explaining that their child’s poor eyesight can affect her success at school: when a child can’t see well, she can’t comprehend fully, performance starts to deteriorate and then after a while she will stop paying attention.
For eye care professionals, making an impact and truly breaking through attitudinal barriers involves communicating as effectively as possible. The key is recognizing that communication now occurs within an environment filled with varying cultural values. Dr. Sahota says it can be South Asian men who end up being very reserved with women doctors.
“They will not look the female doctor in the eye and will sometimes have their wife talk for them,” he says.
Meanwhile, the issue of male doctors treating female patients is not as big of a deal as some people might initially assume for some conservative Asian cultures. According to Dr. Sahota, this is because there is not much touching in optometry and the eyes are not considered as private as other body parts.
There is of course the need to be aware of cultural clothing, such as hijabs for women and turbans for men. Turbans, says Dr. Sahota, can get in the way of optometrists when using certain equipment. The key is to always remain sensitive and respectful.
A 2009 Canadian National Institute for the Blind (CNIB) study that investigated barriers to accessing CNIB services in Punjabi and Chinese-speaking communities, also highlighted cultural issues that could get in the way of effective communication. Dr. Alexander Shaw, Ph.D., a lead researcher in the CNIB study, says that things such as “not looking someone in the eye” can be misinterpreted to mean poor eyesight, while the reticence of some people could have them labelled as “bad patients” when they could simply be uncomfortable with English or could believe “it is not their place to ask questions.”
This is one reason why Dr. Shaw says eye care professionals should make the most of the situation when family members accompany a patient to an eye exam. ECPs should not hold the view that these extra family members are “in the way,” but rather part of a possible healthcare solution. They can help translate, explain and comfort. Often, when they leave the office, they can share any new knowledge they’ve learned. In fact, in the CNIB study, one Punjabi senior revealed that in their community getting women involved in the promotion of health awareness and community programs is critical: “If you tell a woman, she will tell the whole family, but if you tell a man, he won’t. Women educate one another, men don’t.”
Back in his Edmonton practice, Total Eyes, Dr. Sharma continues to educate his patients on the proper standard of care. Sure, everyone wants to protect their vision, but in his community he is struggling to get people to realize that there are risks to manage and problems to fix. Until their misconceptions are corrected, they will continue to short change themselves.
This is why he assists with the Multicultural Health Brokers Co-operative in Edmonton. At the MCHB, Dr. Sharma worked on a project to translate informational brochures on healthy vision and children into different languages.
“By educating parents on the importance of eye care and regular eye exams, the goal is to get both parents and children to develop a relationship with their optometrist,” he says.
So while being able to communicate with an increasingly diverse patient base is one thing, being able to connect with them so that they view and manage eye health differently is the greater challenge.