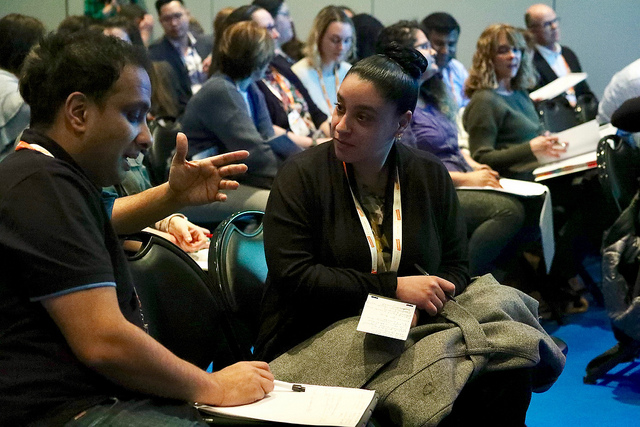 Vision Expo East 2019, held in New York City’s Javits Center, was a great success with the Show experiencing an overall attendance increase of 2.6 percent with a 5 percent rise in registration for optical buyers. Notably, one-third of attendees represented new practices and optical locations providing exhibitors the opportunity to connect with new buyers. Social media was also buzzing as the optical community generated 31 million impressions to date using the hashtag #VisionExpo, an increase of 15 percent over 2018.

At this year’s Show, exhibitors saw increased buying as they previewed new collections, launched new products and showcased their latest innovations to over 14,800 eyecare professionals from across the world. The following are testimonials from exhibitors:

“We were thrilled to use Vision Expo East as the platform to launch our new luxury division, Ultimate Vision USA, which markets Chris Craft, Henry Jullien, McLaren and Plein Les Mirettes,” said Stephen Rappoport, CEO and president of L’Amy America. “Each of the three days, our booth saw increased business activity that allowed us to showcase our new brands and put us into contact with quality buyers for Ultimate Vision USA as well as for our well-known L’Amy America brands. Presenting our latest products at the largest gathering of the vision community is always a wonderful opportunity to establish connections and enhance our partnerships.”

“Vision Expo East was a tremendous success for Safilo this year. It was the perfect stage for us to debut our all-new state-of-the-art booth with a lot of excitement and shows how Safilo is committed to North America in a big way, with significant investment,” said Steve Wright, CCO and president of Safilo North America. “The buzz surrounding our new booth was contagious. We had impressive crowds for our various activations and it was a great space to announce the resigning of the Kate Spade New York license,” said Victoria Hallberg, chief marketing officer of Safilo North America.

“It was great to be at Vision Expo East to see the conversation with Common and Lilliana Vasquez,” said attendee Dr. Tommasina Sideris of Eyes on Litchfield in Litchfield, Conn. “It’s always good to take home something that can be used to improve one’s life and career.”

With its unmatched education courses, engaging speakers and social events, OptiCon @ Vision Expo afforded attendees a variety of learning and networking opportunities. During the first ever National Federation of Opticianry Schools (NFOS) Hoya College Bowl, 300 attendees came together for a rousing competition with the final winner announced as Zachary McDaniel from Roane State Community College.

“We were excited to see the creativity and passion each exhibitor brought to Vision Expo this year, as well as the drive we saw from attendees in the classroom and on the Show Floor,” said Mitch Barkley, The Vision Council’s vice president of trade shows and meetings. “Vision Expo is thrilled that this year’s Show was a success and that we were able to share it with the many individuals who have the same enthusiasm for the optical industry as we do.”

To further promote the importance of eyecare and eyewear, informative messaging was placed throughout New York City the week of the Show, including a full-page ad in the New York Times highlighting the many eyecare options available to consumers, as well as Think About Your Eyes’ videos showing in multiple locations in Times Square. Additionally, The Vision Council hosted a press event to highlight Vision Expo exhibitors’ products to 86 influencers and members of consumer and trade media.

Vision Expo continues to be a can’t-miss event for the industry. Recently named one of the Fastest 50 by Trade Show Executive, save the date for Vision Expo West 2019, September 18–21 in Las Vegas. Vision Expo East 2020 will take place March 26–29 in New York City.