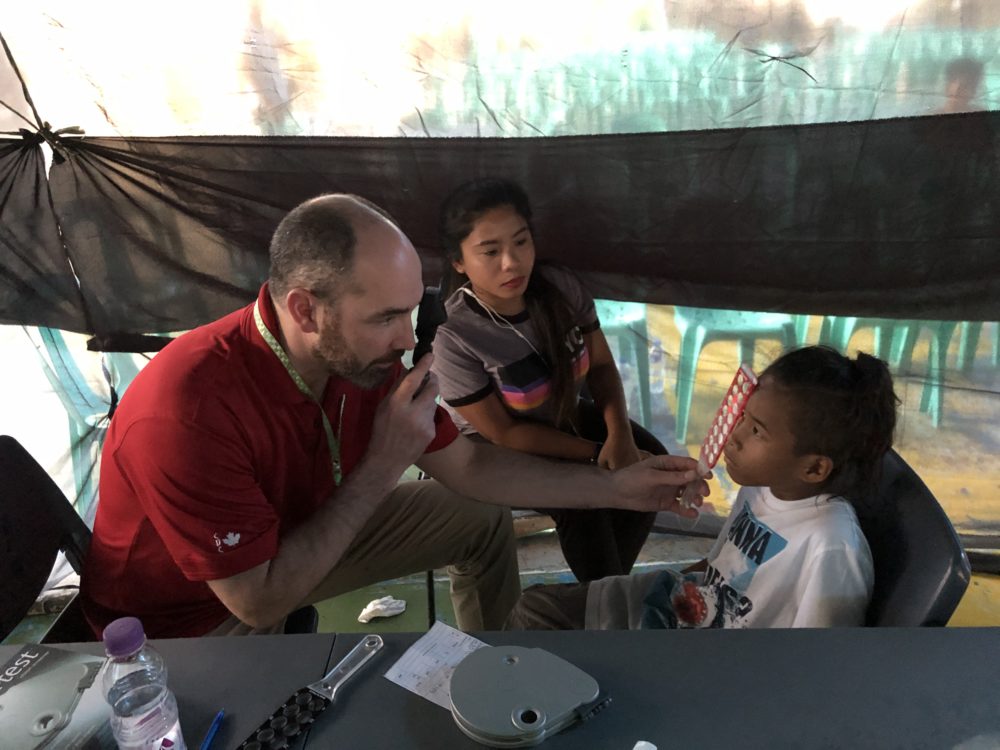 Upon arriving in a small village during an eye care mission trip in the impoverished country of Malawi, Africa, the Calgary-based optometrist and his group of ECPs noticed a young boy, likely around 10 years old, curled up in the dirt outside of the community’s clinic.

He was wearing tattered clothes, no shoes and had dirt-stained tears running down his cheeks. He had been waiting a long while for the group to arrive.

“Through our translators, they let us know that he had endured a tree branch injury to his eye a few days earlier,” Pearce recalled.

“With plenty of topical anesthetic, fluorescein and a portable slit lamp, we were able to see that he had a penetrating injury to the globe which would require surgery.”

The team acted quickly, taking the boy and his mother in their bus to a larger medical centre in another part of the country where the youngster was able to undergo surgery the following day.

Dr. Pearce said that case highlighted the importance of his mission trip work.

“The contrast in first-world and third-world care had never been so apparent,” he said.

That young boy was just one of the countless patients Dr. Pearce has encountered during his multiple volunteer vision care projects over the past two decades to developing countries around the globe.

An optometrist at Signal Hill Eye Care, Dr. Pearce has provided eye care in Central American countries like Honduras and Costa Rica, African nations like Zimbabwe and Mozambique as well as countries in Asia and the Carribean.

This year, he has taken part in mission trips in Cambodia and the Philippines.

Pearce and three other optometrists from his graduating class are planning to travel to rural communities in Jamaica next month, with the support of the charity Canadian Vision Centre, to mark 20 years since becoming optometrists.

Dr. Pearce said he joined a volunteer eyecare mission team shortly after graduating from optometry school and has endeavoured since then to do at least one mission trip a year.

He said two of his mentors, Dr. Peter McGuigan and Dr. Patrick Murphy, were regular volunteers on the trips and introduced him to the idea and supported him with encouragement and time off to participate.

The trips are often a collaboration between optometry, opticianry and ophthalmology, he said, and the size of the teams can range from small groups of four doctors to surgical trips with ophthalmologists and teaching trips with students.

Dr. Pearce said the clinical work the teams do on the trips is varied, but most is refractive in nature and involves providing glasses to men, women and children in need.

“This is by far the biggest unmet need in developing countries. Simply access to eye care and a pair of glasses,” he says.

The teams also diagnose and treat eye diseases and, on trips supported by a specialized opthamologist, treat cataracts.

The teams typically see between 300 and 1,000 patients per day, depending on the size of the group.

Patients are seen in clinics, health facilities, churches, schools or any other area that is accessible to the community.

Typically, the teams bring with them portable eyecare equipment, ocular medication, sunglasses and hockey bags full of glasses to distribute.

“Everyday is filled with heartwarming moments of a high myope seeing their family member’s face or a simple presbyope being able to read. It is common to see some very high prescriptions for people that have never had glasses,” he says.

“Some experiences are more subtle in that you start treatment for a glaucoma patient or get a cataract patient on the pathway to a surgery.”

In other cases, like with the little boy in Malawi, the ECPs are able to help people to receive critical care.

Dr. Pearce said when travelling to a place where even the most basic eyecare services are not available or affordable, it connects him to the immense value of what eyecare professionals can provide.

Signal Hill Eye Care is always accepting old eyeglasses, so Pearce can bring them along on his mission trips.

He says other practices can do the same.

“Collecting old glasses in your office can be of value, not only taking in used glasses for future projects, but also to spread the word of this charitable cause,” he says.

“It may also serve as a practice builder as your patients identify with your philanthropic support.”