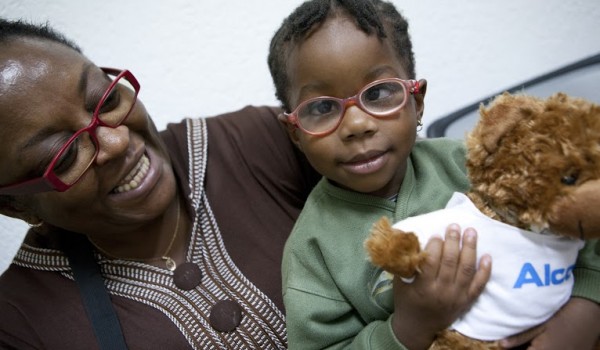 Halfway around the world from her optometry practice in the Greater Toronto Area, Dr. Radhika Chawla and other volunteers with Orbis International teamed up with eyecare professionals in a South African city to deliver an intensive, hands-on training program.

This particular five-day mission in November 2014 was Chawla’s second in the city of Durban and fourth with the 34-year-old international humanitarian organization, which is dedicated to saving sight around the world.

The objective: serving as mentors and trainers for the local participants in order to help boost the skills of the workers and empower them to lead sustainable eyecare programs for their communities.

“In South Africa, we were between two different hospitals and each program we had between three and six participants. We are working together to examine the patients, identify diagnoses and then share how we would diagnose as well as treat. So we’re hands on,” Chawla said in a recent interview.

“We’re building on the skills that are already there so that the trainees are able to then do this after we’re gone and provide a benefit to their community.”

THE ORBIS IMPACT
Orbis International, which has its headquarters in New York City, was founded in 1982 out of concerns that medical professionals in developing countries could not attend overseas training programs due to high costs.

The organization’s solution was to bring the programs to the trainees.

With the help of grants from the United States Agency for International Development as well as private donors, Orbis purchased a DC-8 airplane and had it converted into a fully equipped mobile teaching hospital.

A decade later, Orbis bought and then converted its current aircraft, a DC-10, into an ophthalmic hospital with operating, recovery and sterile rooms as well as a teaching facility with 48-seat classroom and audio-visual equipment that allows people to watch and hear live surgeries throughout the plane.

Since its inception, Orbis volunteers have conducted training programs in 92 countries.

More than 27,000 health care workers were trained by Orbis volunteers in 2014 alone. That same year, the volunteers and local professionals worked side-by-side to provide 2.67 million free examinations for adults and children and perform more than 67,000 eye surgeries or treatments.

Orbis also launched in 2003 Cybersight, which connects Orbis volunteers with local doctors to allow for long-term follow-up mentoring and education.

The organization also conducts research and advocates for improved access to quality eyecare in the countries it works in. It currently has 14 offices globally.

Orbis says its training programs create a ripple effect that benefit communities in developing countries for years to come.

An estimated 285 million people around the world are visually impaired, the organization says. But about 80 per cent of visual impairment can be avoided or cured.

“Access to quality eye care is one of the most effective and cost-efficient paths for reversing the cycle of poverty. Preventing and treating visual impairment empowers individuals. It allows them to become more active in their community and to contribute more to their family and their society,” the organization says.

DR. CHAWLA IN ACTION
Dr. Chawla, who has an optometry practice in Richmond Hill and is also an associate in an ophthamology practice in the Greater Toronto Area, was part of teams of Orbis volunteers that trained health care workers in Vietnam in 2009 and Nepal in 2011. She took part in two missions in eastern South Africa in 2014.

Chawla said preparations for each mission begin before the Orbis volunteers arrive.

Patients, some of whom travel great distances to reach the hospital, have been pre-screened and are waiting to be examined.

Medical professionals, which include optometrists, opthamologists, nurses, medical residents and other paramedical staff, will typically see between 100 and 200 people during each one-week training program.

“Some of the topics that I’ve presented or that we’ve reviewed would be the diagnosis and treatment of strabismus as well as amblyopia. We’ve covered vision testing in children as a general topic,” said Chawla, who is the current chair of the Children’s Vision Committee of the Ontario Association of Optometrists.

“In Nepal, we spent some time on low vision in children. When I was in Vietnam, we were able to spend some time on contact lenses, specifically rigid gas permeable (lenses) for treatment in keratoconus. And also, refraction.”

Chawla, who graduated from the State University of New York College of Optometry in 2003, said it has been an amazing experience to volunteer with Orbis.

She said it’s a true “team effort” that makes each program successful.

“The team that I’ve worked with on each program, everybody is very passionate,” she said.

She said she plans to take part in more missions with the organization.

“Orbis, for me, their mission and mandate has always resonated with me because we’re focused on this commitment to education and training,” she said.