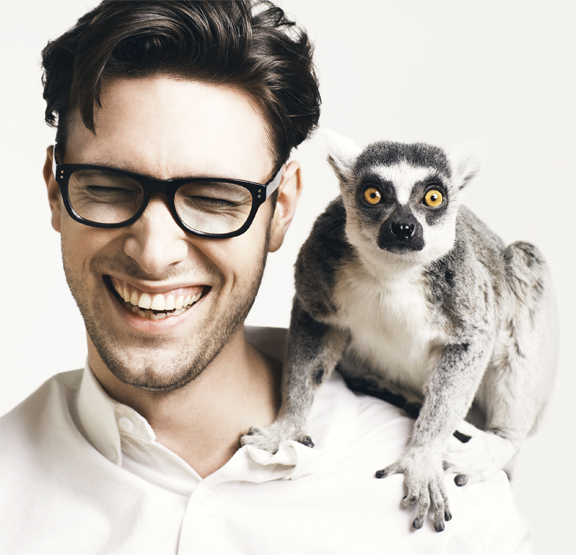 In an industry constantly experiencingnewdevelopments in eyewear technology and fashion, it is often difficult to separate the fads from the truly fabulous.
Rarer and more difficult to treat conditions can also make it more difficult to find eyewear that are worth both the investment and
actually provide real results. This is what XPAND 3D took into consideration when they were developing the Amblyz glasses, designed to improve the eyesight of people with amblyopia (lazy eye).
Already a global leader in multidimensional imaging technology, the company was looking for a way to apply their knowledge to those suffering from amblyopia. The neural disorder affects three to Amblyz offer a real solution to lazy eye beyond traditional patching five per cent of children and is traditionally treated using an eye patch. The patch is placed over the good eye, forcing the weak eye to compensate. This treatment was not always effective when the eyes did not respond or the child refused to wear the patch for the correct length of time.
“Treatment by patching the eye is extremely difficult,” said company chief strategy officer Ami Dror, noting using games like pretending to be a pirate only humours children for so long before they want to remove the patch.
In other cases drops would be administered to blur the vision of the good eye, once again forcing the weaker eye to try and compensate.
The Amblyz glasses are electronic devices that force the amblyopic eye to function and develop the muscles and neural connection using electronic shutters to make one lens intermittently transparent or opaque.
They are worn like traditional glasses which allows children to feel more comfortable.
“Amblyz is really the only way to heal and fix the problem effectively,”
said Dror. “This could change the lives of children around the world.
The glasses will be available through traditional eyewear providers.
“These are clinically approved,” said Dror noting they have been approved by governing bodies in both Europe and the United States including the FDA. “They are a real solution for a real problem.”

Colour Your World
For those suffering from colour- blindness, there are a whole new set of challenges when it comes to choosing eyewear. Right now few options exist that will allow people with colour vision deficiency (CVD) to see colour in true richness and variety.
EnChroma recently unveiled a line of advanced optical sunglasses for those who are colour-blind which will help distinguish between colours and shades.
More than 10 million Americans live with red/green CVD. The sunglasses have a optical coating that filters wavelengths of light responsible for colour confusion, allowing the wearer to see colours as they should be.
“Traditionally eyewear like this would allow for one colour enhancement, but would give up another,” said EnChroma CEO Tony Dykes. “These increase the overall colour enhancement.”
The product, the EnChroma Cx, Cx-D and Cx-PT, was developed while working on a study to determine the feasibility of enhancing colour vision in humans, particularly those suffering from CVD. The company had initially developed the technology to protect laser surgeons while they performed their work.
“Our ‘A Ha’ moment came when we realized that surgeons were taking the protective eyewear out of the operating rooms and using them as sunglasses at the beach,” said VP of Product Development, Dr. Don McPherson in a media statement. “Investigating further, I then discovered that the eyewear had a noticeable positive impact on the wearer’s colour vision, explaining both increased performance differentiating tissue in the operating room and enhanced vividness of the natural world outdoors.”
The technology was so powerful that laser surgeons could noticeably tell the difference between various tissues during procedure leading to more effective treatment.
By narrowing the light filters, the glasses allow for wearers to differentiate between colours in the same way, allowing for a richer, clearer image and the ability to distinguish colours they would not already be able to see.
“I had intended on making glasses that would block one very narrow bandwidth of laser, nothing more,” said McPherson. “Thus the discovery, like many great discoveries, was accidental and a side effect of creating something else. They end result was the development of a product with far more benefits than the original product.
The EnChroma CxSeries will be available in mid-October.

Saving Sight and the Environment
Technology can be found not only for those with special eye conditions, but for those who are looking to make their eyewear a statement of who they are environmentally.
Modo has unveiled a new line aptly named Eco 2.0 which is made of 95 per cent recycled materials.
From the frames to the metal, just about every piece of these fashionable glasses is made from pre or post-consumer product.
“We want to make sure our planet continues to go on and our children and theirs have a future,” said Marketing Manager Natalie Ligon.
She said the company realized there were few pieces on the market that offered a truly sustainable option for consumers who wanted to incorporate their desire to protect
Frames made of recycle materials are both fashionable and earth friendly
the earth into their eyewear. The technology was also difficult
to perfect, said Ligon, because of the difficulty with mixing multiple materials.
“It was hard to get the acetates to be melted down and reused,” she said adding once this was perfected, it was easy to find factories to provide the necessary materials to craft they eyewear.
The result was a light-weight piece of eyewear made from many of the items found in everyday homes and workplaces.
Stainless steel was purchased Fromm factories that take fridges and cars for recycling. The materials were turned into sheets of steel which Modo then transformed into the various elements of the glasses. Recycled surgery steel worked allowed Modo to create pieces that were more flexible and comfortable on the eyes.
“These glasses have really evolved and are now equal to any product out there,” said Ligon. “We have got the technology down.”
The Eco 2.0 is now available only or through eye care providers.