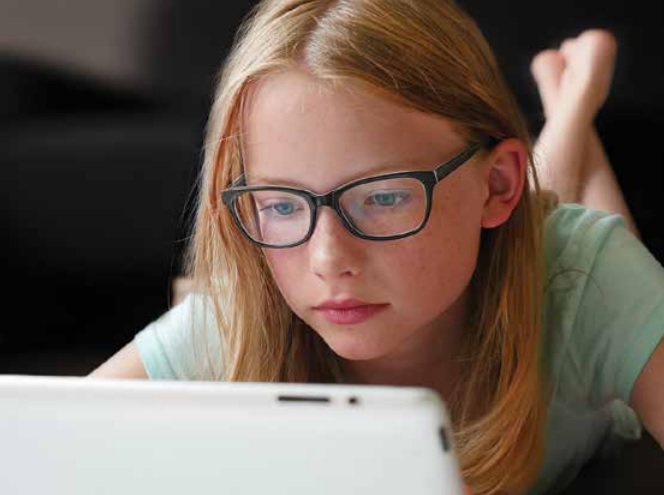 Children aged five to 18 should have no more than two hours of recreational screen time per day, while younger kids should spend even less time in front of electronic screens.
In addition, parents should encourage their children to choose outdoor activities over screen time and kids shouldn’t use screens within an hour of bedtime.

Those are among the recommendations for the safe use of electronic screens contained in a joint position statement by the Canadian Association of Optometrists and Canadian Ophthalmological Society.

CAO president Dr. Michael Dennis said the organizations decided to create the position statement, entitled “Effects of electronic screens on children’s vision and recommendations for safe use,” because of their collective concern that too much screen time can be harmful to children’s eyes.

“We know screens in all forms – television, computers, smart phones – are prevalent in our society and children spend far more time on screens now than ever before,” Dennis tells Optical Prism magazine.

“So we need to put the two together – limit the screen time and hope that this moves children back to more outdoor play.”

Dennis said the guidelines were developed by a working group, which included representatives of both professions. The group reviewed current literature on ocular and visual symptoms related to electronic screen use in children and then drafted evidence-based recommendations for safe use.

The available research, which the report says is scant overall, included a 2014 survey of 200 American children between the ages of 10 and 17 that found that 80 per cent of participants reported burning, itchy or tired eyes after using portable electronic devices.

Other research, including reports from South Korea, suggested that longer use of smartphones was associated with higher odds of developing multiple ocular symptoms in childhood, the daily duration of smartphone use was a risk factor for dry eye disease in children aged nine to 11 and screen use may interfere with children’s sleep due to the emission of blue light.

Based on the literature review, the Canadian Association of Optometrists and Canadian Ophthalmological Society say the safe use of electronic screens should encompass the following:

Breaks, which include whole-body physical activity, no later than after 60 minutes of use (after 30 minutes is encouraged);

Workstation ergonomics – set chair heights so the child’s feet can lay flat on the floor or on a stool underneath the feet to allow for support, chairs should not have arm rests unless they fit the child perfectly, desks should be set at the child’s elbow height or slightly lower, there should be enough depth on the desk to allow for forearm support, displays should be set in front of the child, the top of computer monitors should be at the child’s eye level and then allow them to move the screen down into a comfortable viewing position as needed and workstation lighting should be equal throughout the visual field;

Screens should not be used within an hour of bedtime or in the bedroom;

Outdoor activity over screen time should be encouraged; and

Regular eye exams, which assess a child’s visual ability to cope with their visual demands and offer treatments for deficiencies.