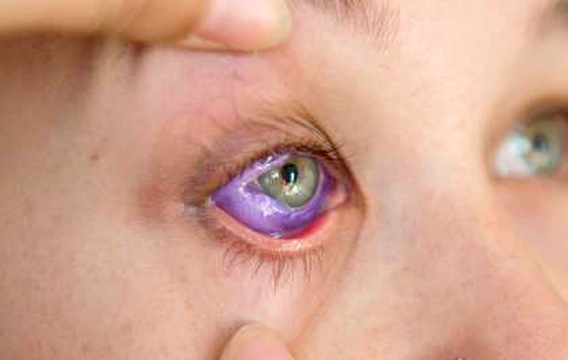 The Eye Physician and Surgeons of Ontario (EPSO) are looking to partner with the Ontario government to ban the practice of eye tattoos and eye jewelry to prevent blindness and increase eye safety.

The EPSO presented a submission to the Standing Committee on General Government, asking to ban scleral tattoos, the organization announced in November 2017. 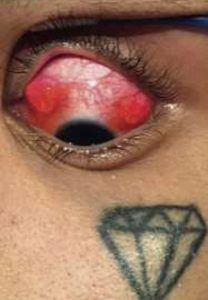 “We also wish to decrease the burden on the health care system by banning this unsafe practice as these patients will require services from ophthalmologists, ocular prosthesis services, and mental health supports to deal with blindness in a young person.” the organization said in a release. “We also wish to prevent future cases of individuals that may need ODSP and social services for long periods of time due permanent disability associated with long term vision loss and chronic pain. Ocular and periocular injections should only be performed by a licensed medical physician due to the high risks associated with blindness and infections of the eye.”

In September 2017, a 24-year-old Ottawa woman went to a tattoo artist to get her sclera tattooed. 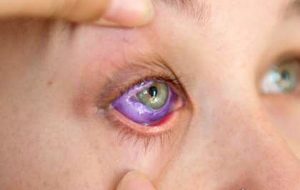 A photo shows the eye of a 24-year-old Ottawa woman who underwent a botched scleral tattoo in September 2017.

The process performed on the woman involved using a needle to inject an unregulated dye under the bulbar conjunctiva of the eye. The tattoo procedure did not go as planned and she immediately experienced intense pain and she is at risk of suffering long term ocular complications.

The Ottawa case went viral around the world as this tattoo artist stated he has done 20 eye tattoos with multiple complications in recent months.

In 2007, an article in the ophthalmology literature was published describing the first examples of vision loss associated with unregulated episcleral tattooing.

Ophthalmologists around the world are experiencing increasing numbers of patients with blindness and loss of an eye because of the increasing popularity of eyeball tattooing.

The risky act of tattooing an eye is being performed by untrained individuals who have no knowledge of the eye’s delicate anatomy. EPSO is looking to the Ontario government to ban the practice of eye tattooing in all communities in Ontario and said it would like to see Ontario be the leader in the creation of this legislation in Canada to protect the public’s vision and prevent unnecessary cases of blindness.

Included in this creation of legislature would also be the exclusion of implanting eye jewellery under the conjunctiva which was initially performed only in the Netherlands but is a growing trend in the USA.

Corneal tattooing has been used as a regulated surgical treatment for disfiguring corneal scars or to treat glare due iris trauma.

This treatment is performed by an ophthalmologist in a sterile operating room with tested dyes that have been studied in the ophthalmic literature for decades.

However, tattoo parlours recent introduction of injecting an unregulated coloured dye at the conjunctival-scleral surface has resulted in chronic ocular inflammation and migration of the unregulated dyes into the eye causing potential toxicity to the retina. Ocular tattooing by untrained professionals has also resulted in numerous severe ocular complications via needlestick penetration of the sclera (eye wall) causing cataracts, retinal detachments and choroidal hemorrhages of the eye.

Many of these eyes have developed untreatable infections (endophthalmitis) that has led to the removal of the eye (enucleation) due to severe pain and potential spread of the infection to the eye socket and brain. 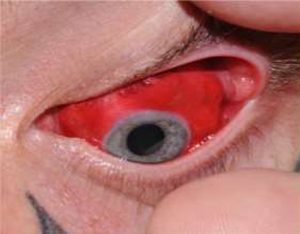 ▪ Other short-term complications reported so far include: headaches, severe photophobia, persistent foreign body sensation, and migration of ink staining.1 ▪ As mentioned, more serious short-term risks include infection (endophthalmitis), globe penetration, retinal detachment and peri-ocular haemorrhage. 1 ▪ Speculation on the long-term consequences include retinal toxicity or granulomatous ocular inflammation. Unfortunately, the long-term risks of cancer are not known with these unregulated tattoo inks and dyes.

Conjunctival tattooing has only recently been introduced and as such there is no legislation concerning its use in most countries including Canada.

In the US state of Georgia, tattoos are forbidden within an inch of the eye socket except when performed by a physician. The Royal Australian and New Zealand College of Ophthalmologists is working with the South Wales state government to amend legislation to include a new section that will make it an offence for a person other than a medical practitioner, or other person prescribed by the regulations, to perform eyeball tattooing.

A 25-year-old woman in Brazil experienced severe ocular pain and decreased vision in the left eye. In addition to having black deposits on various parts of her eye, she experienced severe anterior uveitis and later, secondary glaucoma.

Once this is amended they look to obtain the same results in other states and eventually New Zealand.

For more information or to view the document CLICK HERE. 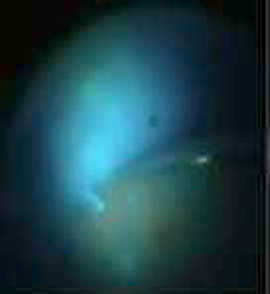 A 49-year-old Caucasian man from Australia/New Zealand underwent an eye tattoo and a tattoo artist inadvertently penetrated the globe and tattoo pigment crystals were injected into the vitreous, retina and sub retinal space which resulted in inflammation, retinal toxicity and endophthalmitis. Image shows blue tattoo pigment present in the vitreous and on the retina seen intraoperatively.

A photo shows the eye of a 24-year-old Ottawa woman who underwent a botched scleral tattoo in September 2017.

A 25-year-old woman in Brazil experienced severe ocular pain and decreased vision in the left eye. In addition to having black deposits on various parts of her eye, she experienced severe anterior uveitis and later, secondary glaucoma.