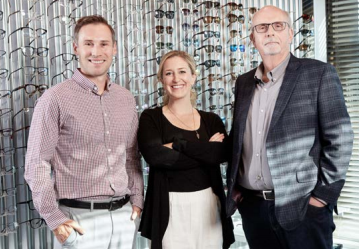 OSI Group has provided Optomeyes with the tools and support needed to optimize the award-winning, dual-location eyecare business in southwestern British Columbia.

Dr. Bart McRoberts, an OSI Member for 35 years, says Optomeyes has made use of multiple OSI Group services — from staff training and practice management to group purchasing and equipment financing.

OSI Group was also there to deliver management support and advice while optometrists Dr. Sydney Davidson and Dr. Clark Bowden became partners in the business, as part of McRoberts’ plan to eventually have them take over.

“Overall the OSI Group has been an excellent partner to drive our success,” McRoberts says. “I have been a member since 1983, so I’m probably guilty of not noticing it hum away in the background. Our dispensary costs are hugely reduced and we still make our own choices.

“The Optosys software is fantastic — I was initially hesitant, but there is no way we would go back now. OSI’s Optosys software is probably the most effective on the market, yet the cost is extremely reasonable compared to comparable. The staff training provided by OSI is also extremely valuable to our offices. You can never get enough trained staff and it’s impossible to have too much training.”

Optomeyes: Doctors of Optometry traces its roots to 1964. When McRoberts purchased the practice in Squamish, B.C., in 1974, it had only one doctor and one other staff member.

A second practice was purchased in West Vancouver 11 years ago and, combined, the two sites now have six doctors, including an ophthalmologist, and about 30 staff.

McRoberts says his personal preferences in practice are dry eye, glaucoma and macular degeneration, but he also does a fair amount of work related to ortho-K and ocular nutrition.

He says the addition of new doctors has enabled the business to add new specialties, such as vision training, post-concussion, low-vision and specialty C.L. fitting.

Over the past 15 years, McRoberts has been working on a transition plan that has focused on bringing optometrists on board with an interest in owning an independent clinic.

Dr. Davidson and Dr. Bowden became part of the team and became involved in management and operational decisions.

“After some experience in the clinic, I arranged a buy-in over time to make it easier for them,” McRoberts says.

The two optometrists acquired full ownership of Optomeyes’ Squamish office in 2017 and have first rights to do the same over time with the West Vancouver location.

“When Dr. Davidson and Dr. Bowden expressed an interest in partnership, OSI was there with management support and advice to make the transition easier,” McRoberts says. “Our doctors attended regional events that included a focus on human resources and building patient loyalty. OSI’s leadership and management program allowed us to get our senior staff properly trained to support the goals of the ownership team and keep the clinic growth on track.”

Managers were coached to create action plans and, using OSI’s Optosys KPI (Key Performance Indicators) management reports, the owners have been able to clearly track the success of specific areas of focus in the clinic.

“As we gained new staff each year, our OSI practice advisor Michelle McLeod was at our staff training retreats and in our clinic, working with us and our team on skills training, marketing and team building. We made use of the OptoFinance department to get new equipment for our expanding optometry team and specialized testing services,” McRoberts says.

“However, you can’t have two masters. You either work for your patient or you work for your corporate bosses,” he says. “Independent practice is what is best for the patient and OSI makes it possible for the independent to compete.”

One way they do so is by offering its Members quantity purchasing.

OSI Group negotiates with more than 130 accredited suppliers, and so provides its Members with access to exclusive discounts that increase profitability and add a competitive edge.

“OSI has helped us in many different ways. It is an integral part of our office organization. It’s humming along in the background doing scheduling, optical accounting, filing patient records, negotiating with suppliers and many other items we no longer have to think about on a day-to-day basis,” he says.