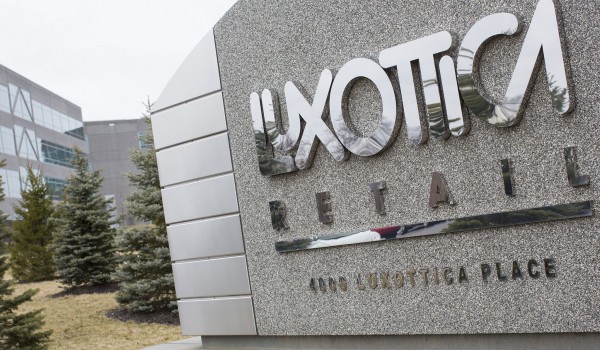 Luxottica released it’s Annual Review 2015 which outlined the company’s continued profitability leading into 2016 as well as look at long term strategy.
It was also released that there are no talks between Luxottica and Essilor.
Luxottica Chief Executive Massimo Vian told shareholders that there are no discussions with France’s Essilor or Germany’s Zeiss over possible tie-ups.
He said both companies are Luxottica’s suppliers and that is the only relationship Luxottica has with them.

Both the Retail and Wholesale divisions reported an increase in net sales at constant exchange rates2, even if compared with the strong first quarter of last year, when the launch of the first Michael Kors collection generated peak demand in North America. In addition, the retail performance was affected by a less favorable retail calendar due to the adoption of the Gregorian calendar in the quarter.

The Group continues to grow in North America and Europe as well as in emerging markets,excluding the negative impact of exchange rates, particularly in Latin America.

In 2015, Luxottica launched a series of initiatives that will ensure greater efficiency and integration of its different businesses. In 2016, this effort will be enriched with new actions that will help to free up resources that can be reinvested in activities with higher productivity and profitability. Luxottica is considering a simplification of its corporate structure in regional markets around the world as well as an evolution of the marketing function that would put more emphasis on digital communication.

On the commercial front, the Group remains focused on initiatives that assure greater price alignment around the world and protect the equity of its major brands.
On the retail side of the business, a new organizational structure provides for smoother coordination at the global level and will help facilitate the ambitious plan of opening more than 1,000 stores in 24 months. This plan will be supported by a new store model aimed at maximizing the productivity of the Group’s network.

Finally, Luxottica has started construction on three new laboratories for the production of ophthalmic lenses using advanced technology and sophisticated automation systems. Operating these labs within the Group’s main distribution centers will allow the Company to integrate lenses and frames at the right phase of the cycle, optimizing the level of service for its optical retail brands.

“We are pleased with the results of the first four months of 2016, in line with our expectations, and the quality of our growth. It is growth achieved in a more volatile and uncertain macroeconomic environment and in a phase of deep transformation for the Group’s commercial approach. We’ve had some initial sacrifices due to the harmonization of prices in major geographical areas, the implementation of strict trade policies towards online operators, and the clean-up of some of our clients’ inventories”, commented Leonardo Del Vecchio, Executive Chairman, and Massimo Vian, CEO for Product and Operations. “Therefore, these results, compared with those of our bestquarter in 2015, do not reflect the activities and initiatives we are implementing to strengthen our competitive position and lay the foundation for healthy and sustainable growth for the long term.”

“We are watching with great interest the optical business results, which drove growth in major markets early in the year. The sun segment, typically slower in the first quarter, showed some uncertainty mainly due to the slowdown in tourism in the United States and Hong Kong.

“While we suffered more than expected in certain markets such as Hong Kong and the Middle East as well as in Oakley’s sport channel, we expect sales to rebound in the coming months due to the launch of innovative new collections and our new digital marketing strategies. Moreover, we are confident and confirm our guidance for the full year.”
“While 2016 is a year of meaningful change for the Group, the pillars of our strategy are the same: product quality, strong brands, efficient factories, continuous expansion of our widespread distribution and the highest level of service. But they are gradually adapting to a changing world. In the past, we have successfully demonstrated our ability to innovate and reinvent ourselves. The initiatives we’re putting in place and the investments we’re making in technology and infrastructure will put us in a position to win in the long term.”

North America
In North America, sales performance was positive and accelerating versus the fourth quarter of 2015 at constant exchange rates2, even compared to the record first quarter of last year (+6.7% at constant exchange rates2). In both the Retail and Wholesale divisions, the optical business registered solid sales growth, while the sun business has been flat.
Wholesale sales rose 2.7% at constant exchange rates2 compared to the first quarter of last year when the launch of Michael Kors surpassed management’s expectations. This past quarter also saw the initial benefits of Oakley’s integration into the optical channel, which were partially offset by the impact of the launch of initiatives to protect and further strengthen the brand portfolio.
Retail sales grew 0.9% at constant exchange rates2,5, negatively impacted in the quarter (approximately 1%) by the shift to the Gregorian calendar, as the first quarter of 2016 included days of the year that typically produce lower sales than the first days of April.
LensCrafters continued to post a solid performance with comparable store sales4 up by 2.0%. In contrast, Sunglass Hut registered a slight decline in comparable store sales4 (-1.3%) as low tourism flows affected certain tourist locations, which make up almost 15% of its total sales. The performance of both the retail chains are also compared with the best quarter of 2015.

Europe
Europe continues to be an area of solid growth in both optical and sun, up more than 4% overall at constant exchange rates2. Italy, Spain, Turkey and Eastern Europe were the best performers in terms of total sales growth, all in double-digit territory. France and the UK’s sales results were softer, mostly due to lower tourism flows into these countries due to the recent terrorist attack.
In the wholesale business, the strength of the latest collections and the continuous improvement of the supply chain and, consequently, the level of service, have produced a solid order flow from both independent opticians and retail chains. The growth of the Retail division’s sales was driven by double-digit growth in comparable store sales4 for Sunglass Hut in Continental Europe and by the contribution from new stores.

Asia-Pacific
In Asia-Pacific, net sales were down by 2.1% at constant exchange rates2 compared to the same period of 2015, highlighting mixed trends across the region. Mainland China and Japan confirmed their positive trends with double-digit growth. Particularly in China, the realignment of prices, which started in the second half of 2015, contributed to strong growth in sales volumes and market shares for the Group’s major brands. With Ray-Ban, for example, Luxottica has opened its first Ray-Ban store in Shanghai aimed at increasing the brand’s visibility and strengthening its distribution.
In contrast, Hong Kong and Macao, where the Group recorded a sharp slowdown, continue to be penalized by a progressive deterioration in the macroeconomic environment. At the same time, in Korea, the implementation of SAP in the first part of 2015 impacted shipment timing, which weighed on the first quarter performance, but as of April sales are back on track.
Finally, in Australia, comparable store sales4 were up 4.2% as Sunglass Hut posted another strong quarter and OPSM reported growth, reversing the negative trajectory of the last six quarters thanks to a comprehensive review of the assortments capable of driving more store traffic and improving conversion rates.

Latin America
The new year started well in Latin America, where sales rose by 13.1% at constant exchange rates2 on top of an already strong first quarter in 2015, but were down 7.5% at current exchange rates2 due to the steep depreciation of the Brazilian real, the Mexican peso and other local currencies against the Euro.
In Brazil, the “made in Italy” collections, coupled with Vogue and the recently launched local A/X Armani Exchange collections, confirmed their success both through wholesale doors and at Sunglass Hut.
In Mexico, the Group achieved another quarter of strong growth, confirming the solidity of the strategy pursued for over 20 years in this market.
In retail, performance proved particularly strong at GMO, which posted double-digit comparable store sales4 growth in Peru and Colombia, and at Sunglass Hut in Mexico, where the Group continued its expansion, totaling over 180 stores at the end of the quarter.