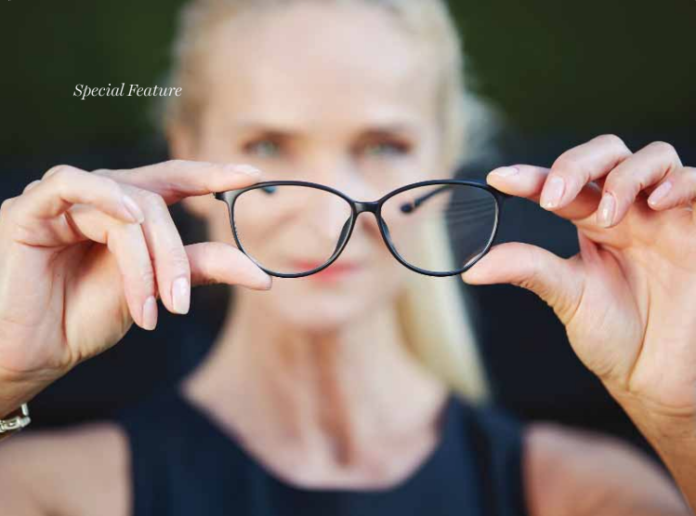 Optical Prism spoke to the leaders in lens technology to see this fall’s must-have features and top innovations for older Canadians.

By age 60, seniors have approximately a third of the light entering their eyes as when they were 20.

However, seniors are also more sensitive to bright light.

That’s why Transitions are likely a good fit.

They filter the bright light to which this patient is now more sensitive and is especially useful for these patients when paired with an anti-reflective coating (which lets more light in). Transitions lenses optimize the amount of light the eyes receive.

The new Transitions Signature GEN 8 lens technology is faster in activation and fadeback.

They’re also even darker than previous generations with 100 per cent ultraviolet protection.

Paying special attention to UV protection can also go a long way to preventing cataracts and help patients feel more comfortable outdoors when recovering from cataract surgery, which is the most common surgery performed in Canada.

AHEAD OF THE CURVE

The ability to drive is central to retaining independence as you age and Plastic Plus has developed a new lens and coating solution that may keep drivers on the road longer without sacrificing safety: The inMotion system.

“It’s the first lens I’ve worn in a long time where there’s been a real wow factor,” says Plastic Plus president Paul Faibish.

The key differentiator of the lens is its night vision zone. This specific area minimizes and compensates night myopia, providing drivers with a superior visual quality at night.

inMotion coatings combine two anti-reflective lens treatments on both sides of the lens that perfectly complement each other.

On the front side of the lens, a specific coating is applied that blocks short wavelengths of the light sources that most affect vision while driving, reducing halos and glare around streetlights and oncoming headlights.

On the back side, a low reflectance treatment, specifically designed to minimize annoying “ghost images” is applied, improving the comfort of the user while driving.

It’s only been on the market less than a year, but Fabish says the feedback has been great.

“Patients and practitioners alike have been thrilled with the results.”

Baby boomers are quickly making up a bigger share of the senior population and Rick Leroux, director of marketing and communications at Centennial Optical Limited, says this fact shouldn’t be ignored.

While many of today’s seniors will take a chance with flashy frames, Leroux explains, when it comes to lenses the same clients will say, “if it ain’t broke, don’t fix it,” often wearing the same progressive lens design for years and not taking advantage of new technologies.

“The technology greatly reduces off-axis viewing, allowing the eyes to comfortably focus in the reading area for longer periods of time,” touts Leroux.

Essilor’s Varilux series of progressive lenses are perfectly adapted for the older demographic.

Varilux is the first progressive lens that has been created and is celebrating its 60 years anniversary this year.

Varilux X Series has the best of Essilor technologies to provide not only sharp vision and smooth transitions at any distance, but also extend the vision within arm’s reach, so the wearers no longer have to tilt or angle the head to find their focus.

HIDE YOUR LINES AWAY

The folks at HOYA know that many seniors require progressive lenses for a smooth transition between reading, driving and all of life’s daily activities.

That’s why HOYA is very proud to offer its progressive ‘no-line’ eyeglasses lenses, which have a gradual curvature across the lens surface and provide not only clearer vision at near and far distances, but also smooth, comfortable transitions in between.

HOYA’S ability to personalize each and every lens means customers, for the most part, can still get the frames they’ve been dreaming of.