Hitting Good Eyesight Out of the Park: An Interview With Cal Ripken 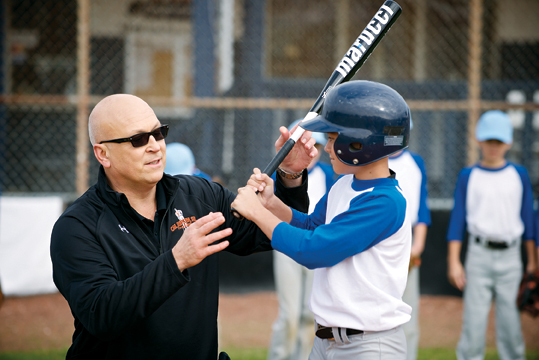 By Sarah McGoldrick
He was one of baseball’s leading hitters with two Golden Gloves to his name and 19 All-Star Game appearances.
Today fans will see Cal Ripken Jr. working just as hard offthe field as he did during his 20 year career on the field. More recently he has partnered with Transitions Optical as one of their new ambassadors.
This new challenge is introducing Ripken to a whole new generation of fans and connecting him with those who have followed him his entire career. “Partnering with Transitions Optical is a natural fit for me, as at this point of my life I have truly come to appreciate healthy vision even more and realize that I may have taken it for granted over the years,” Ripken said in an interview with Optical Prism.
Ripken prided himself on being one of the few players in the dugout that did not require glasses.
He said he began noticing small changes to his sight last year while doing regular day-to-day tasks.
“I hadn’t worn glasses before. I noticed my eyes changing just this past year, when I would sit down to read the newspaper or go to restaurants and struggle to read the menu or strain to see the graphics or teleprompter when I was broadcasting,” he said. “It was the first time the reality of needing glasses hit me—it truly was a life-changing moment, and I knew I needed some help.”
Ripken will act as one of the spokespeople for the “Official Sponsor of Sightseeing Program” which works to demonstrate the benefits of wearing Transitions to improve overall lifestyle.
With a career that requires sharp eyesight and quick response time, Ripken said he always make sure to take care of his vision and overall health.
“Having great vision is just about the most important thing that an athlete, especially a baseball player, can have. Throughout my career, I always had extremely good eyes and took great pride in my vision,” he said. “Each year, I remember leaving the team eye doctor feeling proud. So recently when I noticed my vision starting to become less than perfect, it was a bit of a shock and something I realized I had always taken for granted.”
Ripken maintains a hectic schedule off the field working as a sports broadcaster and various youth baseball programs. He is actively coaching his own son and teaching kids through our Ripken Baseball Camps and Cal Ripken, Sr. Foundation events.
He noted an athlete’s vision is critical to their success as a player in Major League Baseball (MLB), particularly on outdoor fields.
“The ability to see well directly impacts coordination, reaction time and performance—both on and off the baseball field. There are many visual obstacles in the game of baseball—from extreme glare and dark shadows on the field to changing light conditions over the course of the game—the eyes are constantly working hard to adapt and can get very fatigued,” he said.
Ripken was reluctant at first to accept the change in his eyesight. He said the frustration of trying to read the newspaper or a menu was becoming a struggle but he was still holding off seeing a professional eyecare provider.
“I remember being out to dinner one night and really struggling to read the menu, and the waiter came over with a box of readers. It was a little embarrassing, but it also made me come to grips with the fact that I needed some help,” he said.
Ripken said Transitions lenses resulted in a marked improvement in his overall eyesight allowing him to move from the field to the boardroom with ease. He added he enjoys the fact that he doesn’t have to carry several pairs of glasses around with him.
“Because I have my mom’s blue eyes, glare and squinting are always an issue for me, so the Transitions Vantage lenses are very helpful,” he said.
Ripken admits that going to see his eyecare provider about his change in eyesight was a critical step in maintaining his baseball career and being a part of the sports industry in a variety of capacities outside his professional career.
“Baseball has and will always be a huge part of my life. I’m a very active person and spend a lot of time outdoors participating in youth clinics and being involved in baseball at a number of levels,” he said.
As a spokesperson for Transitions, Ripken will be making a number of special appearances across North America including several baseball parks across the United States.
He has also authored several baseball-themed youth novels and can be found meeting with a new generation of fans at book signings and hopes to reinforce the importance of getting children to see an eyecare provider at an early age to prevent long-term damage.
“Whether I’m speaking with fans who love the game or families of children who participate in the Ripken Baseball League, it’s never too early or too late to start caring for your eyes as they truly are the connection to the world around us,” he said.
Ripken noted he has no plans to step away from the field and his improved eyesight means he can continue to see and experience the ballparks he has played on his entire life.
“Well it might sound like a homer answer, but Oriole Park is my favorite. It was the first one of the new throwback ballparks, and I loved playing there,” he said adding he also has a special place for some of baseball’s other hallowed ground.
“As far as other ballparks go, I always enjoyed the history and nostalgia at Fenway Park and Yankee Stadium, and I love Coors Field in Denver.”