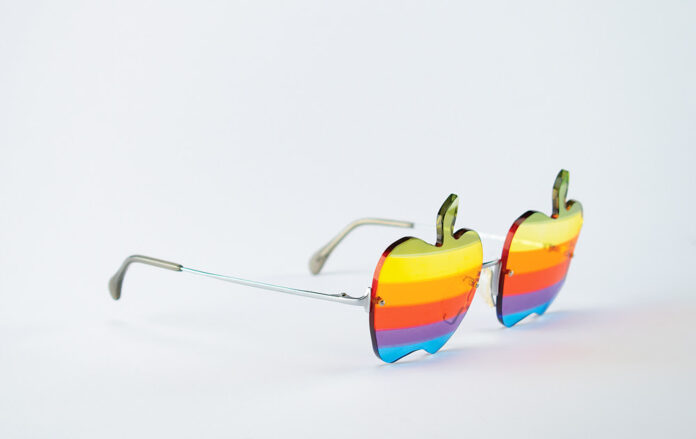 Ultimate in Geek Chic this Holiday season— look no further!
Steve Wozniak’s custom-made Apple sunglasses will be auctioned by Boston-based RR Auction.
The exceedingly rare pair of Apple’ rainbow’ sunglasses that Steve Wozniak had custom made by an optometrist circa 1979. The sunglasses have Metzler-TWE 145 frames and feature vibrant rainbow-colored lenses designed in the shape of the iconic Apple logo. One of a limited issue of 30, these sunglasses include its original sleeve, hardshell case, and cleaning cloths.
The cover of Steve Carr’s 1984 book, WOZ: the Prodigal Son of Silicon Valley, depicts Wozniak wearing a pair of these totally hip sunglasses. Squirreled away for 40 years, this is the ultimate accessory for the discerning Apple fan.
Accompanied by a signed letter of provenance from Wozniak: “Around 1979, I had an optometrist in Palo Alto custom make 30 pairs of these glasses with lenses in the shape and rainbow colors of the original Apple logo. It was a project, just for fun. It’s amazing to see these over forty years later, with the original box, case, and cleaning cloths.”
Online bidding for the Steve Jobs + Apple Auction from RR Auction will begin Dec 10 and conclude Dec 17. For more information, go to www.rrauction.com.
—
Headlining the sale is an Apple-1 computer with its original box signed by Steve Wozniak.
The Apple-1 was originally conceived by Steve Jobs and Steve’ Woz’ Wozniak as a bare circuit board to be sold as a kit and completed by electronics hobbyists, their initial market being Palo Alto’s Home-brew Computer Club. Wozniak alone designed the hardware, circuit board designs, and operating system for the computer, and he first demonstrated the Apple-1 at a club meeting in July 1976. Upon seeing interest among the membership, he and Jobs pooled their resources to have the boards produced. They initially hoped to sell 50 of them at $40 per board to recover their initial $1000 outlay. However, seeking a larger audience, Jobs approached Paul Terrell, owner of The Byte Shop in Mountain View, California, one of the first personal computer stores in the world. Terrell offered to buy 50 of the computers—at a whole- sale price of $500 a piece, to retail at $666.66—but only if they came fully assembled. With this request, Terrell aimed to elevate the computer from the domain of the hobbyist/enthusiast to the realm of the mainstream consumer. Jobs agreed to Terrell’s deal, and managed to secure favorable terms for financing the parts necessary to build 50 Apple-1 computers.
The Apple-1 computer was restored to its original, operational state in September 2020 by Apple-1 expert Corey Cohen. (Estimate: $400,000+)
“What makes this particular Apple-1 even more valuable is that the collector had the foresight to present one of the extremely rare original boxes to Steve Wozniak and have the Apple-1 creator hold it in his hands one last time,” said Bobby Livingston, Executive VP at RR Auction.
Other items include computers from the collection of software pioneer Roger Wagner, materials from the collection of Apple’s first COO Del Yocam, and a rare musical cue sheet from Pixar’s Monsters, Inc., signed by Steve Jobs, Randy Newman, and others.
Online bidding for the Steve Jobs + Apple Auction from RR Auction will begin Dec 10 and conclude Dec 17. For more information, go to www.rrauction.com.