Frames ‘Made with Love’ at Guild Eyewear 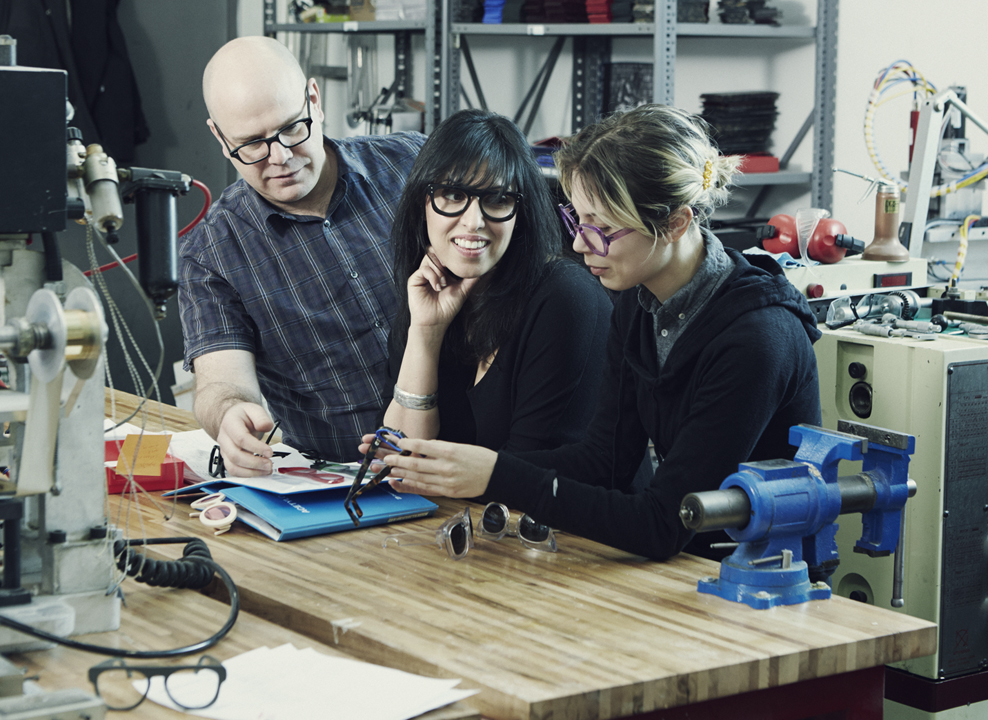 Frustrated by a lack of off-the-rack glasses for people with larger-than-average heads, Rod Fitzsimmons-Frey decided to start making frames himself.

The Toronto computer engineer started out by making the handcrafted eyewear in his garage in the summer of 2013, using computer software he created and a hand-built CNC machine.

“GUILD Eyewear was formed out of a need for Rod to find glasses that properly fit,” says the company’s creative director Savi Pannu.

Fitzsimmons-Frey, having little knowledge or interest in the style side of the eyewear business, asked Pannu, an old friend, to join his fledgling company and help create its YYZ collection.

The small company moved in 2014 to a small studio in the Dupont and Dovercourt area in Toronto’s west end. It has remained there since. Three people – Fitzsimmons-Frey, Pannu and production director Sarah Anne Friend – now work at GUILD.

“Collectively, we have a background in art and design, so playing around in the studio or with the software is second-nature to everyone at GUILD. You could say that this quality is kind of a requirement to be a GUILD team member,” Pannu says.

The company also collaborates with Toronto-based guest designers to create eyeglasses for its YYZ Collection, which has both classic and contemporary lines – everything from the bold-coloured, horn-rimmed Walshies and the 1980s chic-inspired Blaetter frames to the elegant Dandy and sophisticated Baum specs.

GUILD also designs and manufactures handcrafted sunglasses and offers a bespoke – made to order – eyewear service for people that are looking for frames or shades that are even more personalized.

Everything at GUILD is done in-house and under one roof. And, according to Pannu, each piece is made by hand and “with love.”

The frames and temples are milled in the studio from pre-cut pieces of Mazzucchelli cellulose acetate, which is made from cotton and wood fibres. Artisans then scrape, buff and sand the frames, before they are placed in tumblers for at least five days. After the frames are polished, they are heat-stamped with the GUILD logo and then assembled, handriveted and given a final heat adjustment before being shipped out to the consumer.

“Our customers range from people who are interested in one-of-a-kind, locally-made and handmade products, the design-obsessed, those who are looking to recreate designs that may be out of production or those looking for a custom-designed look,” says Pannu. “Many of our customers are also people who find it difficult to purchase off-the-rack frames that fit them –they may have slight asymmetry or require larger or smaller sizes. We really operate on a ‘love all, serve all’ model.”

Pannu says one of the company’s promises is that if someone does not fall in love with their custom-made frames, GUILD will work with them until they are completely satisfied.

“That generally means remaking components to fit properly or altering a design to meet their aesthetic expectations,” she says. “Because our manufacturing process allows maximum flexibility, it’s relatively easy to make these tweaks on the fly. Purchasing a pair of GUILD frames or sunglasses can often be a highlycollaborative process and we like it that way.”

Frames from GUILD’s YYZ collection as well as the company’s sunglasses retail for $250 apiece.

GUILD eyewear can be purchased online at www.guildeyewear.com and at several shops in the Greater Toronto Area, including The Drake General Store on Queen Street West, BRIKA, Likely General, MADE, Raw Space, LEN, Spadina Optometry and St. Clair Eye Clinic.