Eyes On The Ball: A conversation with Dr. Keith Smithson 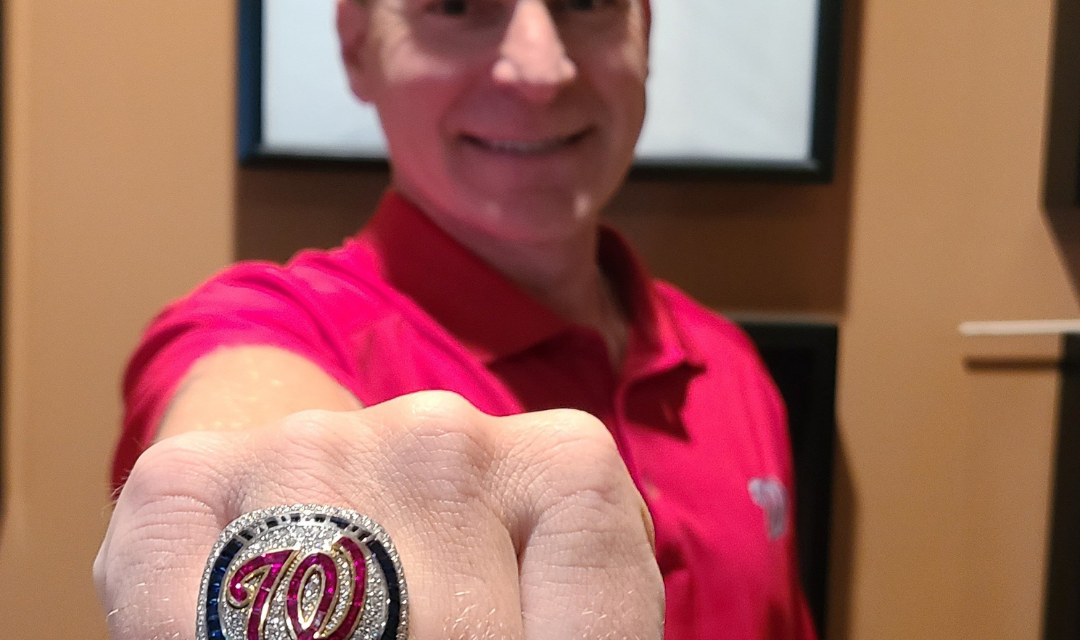 The year is 2019. There is no COVID-19 pandemic and hundreds of thousands of people have gathered in the United States capital to cheer on the Washington Nationals after an epic World Series win.

Under a clear autumn sky, the sea of revellers in red, salute the players riding in open-top buses along Constitution Avenue.

Some people have waited hours to catch a glimpse of Max Scherzer, Stephen Strasburg or Keith Smithson…wait…Keith who?

Dr. Keith Smithson didn’t throw a single pitch or hit any home runs. He didn’t dress for any games, yet, he played an integral role in bringing the World Series back to Washington for the first time in nearly a century.

Smithson is the team optometrist for Washington’s pro sports teams and what a ride it’s been.

A Stanley Cup for the Capitals in 2018. A WNBA championship for the Mystics in 2019 and then a World Series win that same year, because, why not?

Smithson ensures that every player, from the draft to the big leagues, sees the game with optimal vision. In this sitdown with Optical Prism, he talks about the mind-blowing evolution of sports vision therapy, the rewarding nature of his work and the perks of treating eyes worth $38-million per season.

Smithson was always a determined athlete himself. Growing up in Pennsylvania, he loved soccer and even played at the college level.

However, a path to the pros wasn’t in his future.

“I knew that I wanted to do something involving medicine and something that would help me stick around sports,” recalls Smithson. “But I never really put it together until I had a class about the concept of vision and I found it fascinating.”

These days, pro sports clubs invest heavily in medical personnel to get an edge on the competition.

Smithson says today’s technology to identify and correct vision issues is almost unbelievable, using computers to crunch numbers and run virtual training exercises. Contrast that to 20 years ago when all they had was, as Smithson puts it, “beads on strings.”

“There was no science behind it. We just kind of thought it would work so we threw it on the wall to see if it would stick. And now you have things that are quantifiable that you couldn’t imagine before.”

Smithson’s team can administer a comprehensive, dynamic vision test on the athletes

using the portable, all-in-one RightEye Vision System in as little as 5-minutes. The

Then, they create a customized training program that remediates and resets the athlete’s focusing mechanism.

“You can get them tracking pucks and targets and balls more efficiently than they were before,” explains Smithson. “You can track their eyes’ movements to the millisecond and even how their brain processes information.”

Sports concussions are top of mind and Smithson plays a big role in rehabilitation. He says he’s noticed a major shift since he started working with pro athletes.

“I think people are aware that they have to take it seriously. We realize now that we have to take players off the field and give them a chance to heal as opposed to, ya know, telling them to ‘rub dirt on it and go back and play.’ ”

Smithson also points to research that says visual skills enhancement may even prevent head injuries and concussions in the first place.

“If an athlete is going out and performing their sport more safely because they see the world quicker and they have better peripheral awareness and depth perception or their reaction speed is enhanced, maybe they’re more likely to avoid that critical blow which injured them in the first place.”

WE ARE THE CHAMPIONS

“I won an MLS Cup with DC United in 2004 and being out there with the team and getting champagne in your hair…I couldn’t wait to do it again.”

However, it would take some time before Smithson would taste champagne again.

“You have to do your job well so you can be part of special moments like that. Everybody in the organization is working to build that championship environment. As a team physician, I’m trying to perfect my piece of the puzzle and make sure our players perform as well as they can.”

That hard work and perseverance led to one of Smithson’s fondest memories so far, that celebration with the players on the streets of DC in 2019, the experience of being showered with adoration by roaring spectators. Also, when you’re partying with multi-millionaire professional athletes, things tend to get a bit wild.

“The bus I was riding on, ended up with a lot of guys with no shirts on and all that happened because some stuff was brought on the bus that wasn’t supposed to be there. I take no responsibility for that. It had nothing to do with the bottle I brought on the bus, but it was a good time.”

“I’ve filled up one hand with rings, so I’ve got another hand to fill up.”

While being surrounded by stars might be overwhelming for some, Smithson cherishes the friendships he’s forged over the years, including his relationship with former Nationals slugger and MLB all-star Bryce Harper.

“I met the guy when he was just 18-years-old and I got to know him and his family well. I love the guy and he’s just an awesome dude. My son plays baseball and wears 34. My dog’s name is Harper. You root for these guys because you know them. It’s a group of friends and family and that’s what makes teams good.”

Aspiring young athletes from all over the U.S. come to Virginia, hoping that Smithson’s expertise will elevate their game from “good” to “great”. These kids have big dreams and Smithson has the power to change the trajectory of their careers.

“We’ve known some of these kids since they were 10 or 11-years-old…and now they’re signing massive contracts,” he says. “It’s some of the most rewarding stuff we get to do.”

While Smithson loves helping these athletes strike a big payday, what he finds most inspiring, are the life lessons that these kids, including his own, are learning from sports.

“How to be a good teammate or how to work hard and not give up,” he says. “With this crazy world, we all lived in this past year, sports teaches you how to deal with a tough situation, how to hold your head high and keep pushing forward. We need to find something that helps these kids be successful in their sport. If they do nothing more than continue learning life lessons and becoming better humans, that’s hugely rewarding.”

Smithson wants to spread his knowledge and help young athletes get the most out of their vision without travelling to Virginia.

He has launched a new site, SportsVisionPros.com, which he calls “the Google of sports vision”. It’s a free, online education resource related to athletic eyewear, concussion rehab, contact lens technology…anything to do with vision.

Smithson is also working on what he believes is the next frontier in visual performance enhancement, by developing a virtual reality program, Skeyefall, that will combine engaging gameplay and visual skills enhancement for sports.

“I love the idea of teaching something that can make a difference for athletes at all levels,” says Smithson. “Finding a way for sports to be something that can change someone’s life is a cool and powerful thing. I’m in this for the long haul.”

Keith A Smithson, OD practices at Northern Virginia Doctors of Optometry. He is the director of

performance consultant for the Washington Capitals.