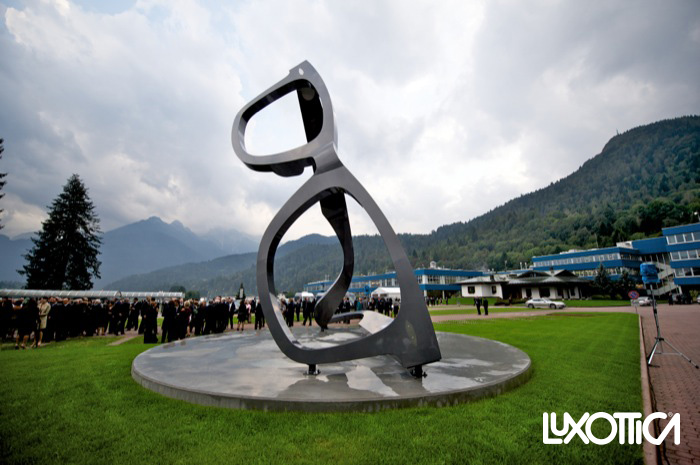 The world’s largest lens maker and the biggest manufacturer of eyeglasses in the world have agreed to a merger.

France’s Essilor, which owns lens brands like Transitions, Varilux and Crizal, and Italy’s Luxottica, which has an extensive brand portfolio that includes Ray-Ban, Oakley and multiple designer labels as well as retail network that includes LensCrafters and Pearle Vision, announced the deal in a joint news release Monday.

Together, the two companies would have combined net revenues of more than 15 billion euros (nearly $21 billion CDN), along with 140,000 employees and sales in more than 150 countries.

“With this agreement, my dream to create a major global player in the eyewear industry, fully integrated and excellent in all its parts, comes finally true,” Leonardo Del Vecchio, chairman of Delfin, which owns the biggest stake in Luxottica, and executive chairman of Luxottica Group, said in a statement.

“It was some time now that we knew that this was the right solution but only today are there the right conditions to make it possible. The marriage between two key companies in their sectors will bring great benefits to the market, for employees and mainly for all our consumers. Finally, after 50 years, two products which are naturally complementary, namely frames and lenses, will be designed, manufactured and distributed under the same roof.”

Hubert Sagnières, chairman and CEO of Essilor, said the merger will allow the companies to better respond to consumers’ needs in both vision correction and vision protection.

“With extraordinary success, Luxottica has built prestigious brands, backed by an industry state-of-the-art supply chain and distribution network. Essilor brings 168 years of innovation and industrial excellence in the design, manufacturing and distribution of ophthalmic and sun lenses. By joining forces today, these two international players can now accelerate their global expansion to the benefit of customers, employees and shareholders as well as the industry as a whole,” Sagnières said.

The two companies say the transaction will allow the combined group to better seize growth opportunities resulting from strong demand in the eyewear market, driven by the increasing need for corrective and protective eyewear and the appetite for strong brands.

“The combination would create a key player, operating across all segments of the eyewear industry. The new entity would leverage state-of-the-art production capabilities and widespread distribution networks to better serve clients and deliver value to all stakeholders,” the news release says.

Based on a preliminary analysis, the combined group is expected to progressively generate revenue and cost synergies ranging from 400 million to 600 million euros ($558 to $838 million CDN) in the medium term and accelerating over the long term.

The companies say the merger will allow them to be “in a stronger position to address the vision needs of the 7.2 billion people in the world out of which 2.5 billion people still suffer from uncorrected vision problems.”

Luxottica, which was formed in 1961, is a global leader in the design, manufacturing and distribution of fashion, luxury and sports eyewear. Its portfolio includes proprietary brands such as Ray-Ban, Oakley, Vogue Eyewear and Persol as well as licensed brands including Giorgio Armani, Burberry, Chanel, Coach, Dolce&Gabbana, Michael Kors, Prada, Ralph Lauren, Tiffany & Co., Valentino and Versace. Its global wholesale distribution network covers more than 150 countries and is complemented by an extensive retail network of approximately 7,800 stores, with LensCrafters and Pearle Vision in North America, OPSM and LensCrafters in Asia-Pacific, GMO in Latin America, Salmoiraghi & Viganò in Italy and Sunglass Hut worldwide. In 2015, Luxottica posted net sales of approximately 9 billion euros ($12.6 billion CDN) and more than 80,000 employees.

Essilor, meanwhile, designs, manufactures and markets a wide range of lenses to improve and protect eyesight. Its flagship brands are Varilux®, Crizal®, Transitions®, EyezenTM, Xperio®, Foster Grant®, BolonTM and Costa®. It also develops and markets equipment, instruments and services for eyecare professionals. The company reported consolidated revenue of more than 6.7 billion euros ($9.36 billion CDN)  in 2015 and employs 61,000 people worldwide. It markets its products in more than 100 countries and has 32 plants, 490 prescription laboratories and edging facilities, as well as five research and development centers around the world.

Essilor’s mission is to “improve lives by improving sight.” The company allocates more than 200 million euros ($279 million CDN) to research and innovation every year.

***
Here are the transaction terms and next steps of the merger, according to the statement from Essilor and Luxottica:

The transaction would entail a strategic combination of Essilor’s and Luxottica’s businesses consisting of (i) Delfin contributing its entire stake in Luxottica (approx. 62 per cent) to Essilor in return for newly-issued Essilor shares to be approved by the Essilor shareholders meeting, on the basis of the Exchange Ratio of 0.461 Essilor shares for 1 Luxottica share, and (ii) Essilor subsequently making a mandatory public exchange offer, in accordance with the provisions of Italian Law, to acquire all of the remaining issued and outstanding shares of Luxottica pursuant to the same Exchange Ratio and with a view to delist Luxottica’s shares.

Essilor would become a holding company with the new name “EssilorLuxottica” via a hive-down of all of its operating activities into a wholly-owned Company, to be called Essilor International, and the contribution by Delfin of its Luxottica shares.

The transaction is subject to Essilor’s Works Councils’ information and consultation procedure according to French law.

The board of directors of Essilor held on Jan. 15, 2017, unanimously approved the agreement with Delfin, which it considered to be in line with the best interests of shareholders, employees and other stakeholders, and decided to initiate the information and consultation of its works councils on the basis of such proposed transactions.

The board of directors of Luxottica, held on the same day, unanimously acknowledged that the transaction is in the best interest of Luxottica and shared the strategic rationale of the business combination.

Essilor International, after completing the hive-down noted above, and Luxottica would maintain their respective board of directors.

An integration committee would be implemented to ensure smooth and successful integration of the two companies.