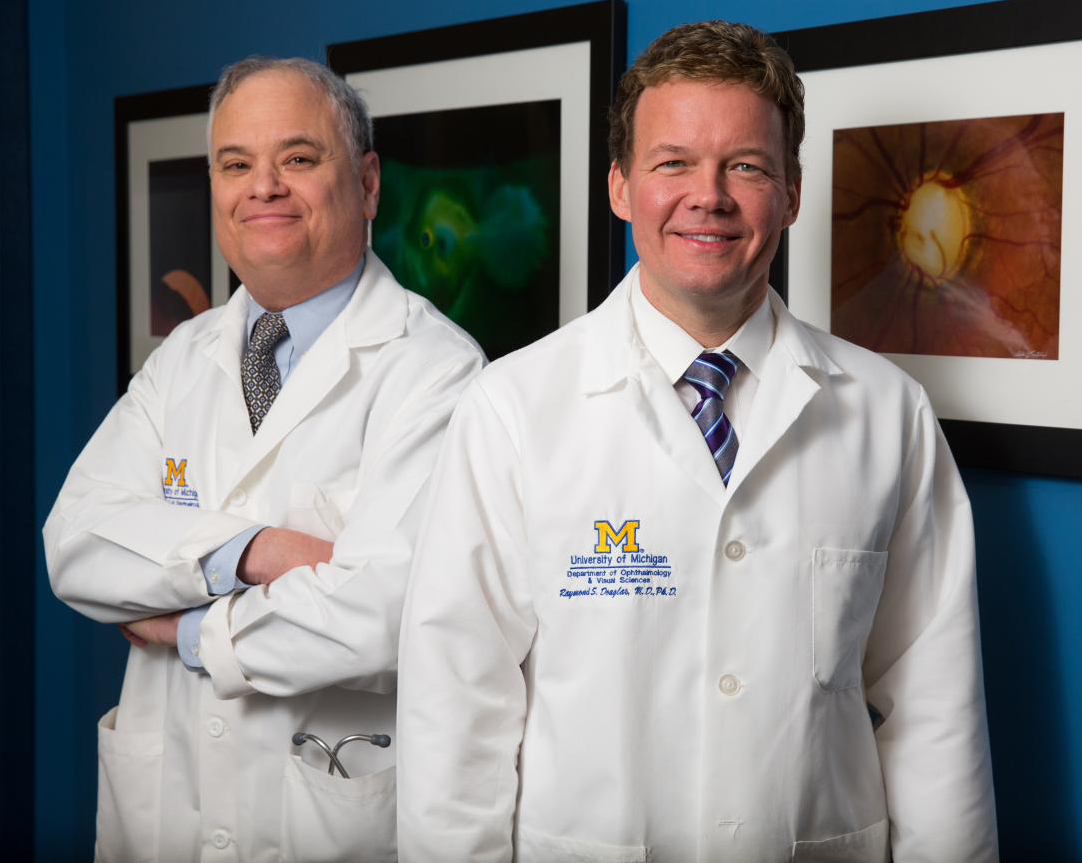 Graves’ eye disease is characterized by inflammation and a buildup of tissue around the eyes that cause them to bulge painfully from their sockets.

There has never been a safe and effective treatment for the disease, also known as thyroid eye disease, for the millions with the condition.

Patients see inconsistent benefit from anti-inflammatory medicines and complex orbital surgery helps give some a more natural appearance once the disease has run its course.

The results of a clinical trial led by the University of Michigan Kellogg Eye Center offers hope for those with moderate-to-severe active TED. Patients had a significant reduction in eye symptoms after treatment with teprotumumab, a study drug the U.S. Food and Administration called a “breakthrough therapy.”

Most study patients in the trial who got the active drug instead of a placebo had reduced eye bulging, eye pain and swelling and improved quality of life, the study’s primary and secondary end points.

For some, the therapeutic benefit was rapid, occurring within six weeks of intravenous infusions of the drug that blocks what researchers say is an autoimmune attack on muscles around the eyes.

TED is a rare condition associated with Graves’ disease, an autoimmune disorder that causes an overproduction of thyroid hormone, or hyperthyroidism. Symptoms include swelling of the eyelids, constant stare, bulging eyes, eyelid retraction, optic neuropathy, double vision and other symptoms.

Approximately 25 to 50 percent of those with Graves’ disease will develop TED, most of them women.

“Specifically, we have found that there is an unusually high presence of IGF-1 receptors on cells surrounding the eye in TED,” says Smith, who is widely recognized for his groundbreaking research on treatments for TED and related autoimmune disorders.

Building on this discovery, an outgrowth of basic science research conducted at the University of California, Los Angeles, and then at the Kellogg Eye Center, Smith and study author Raymond Douglas, M.D., Ph.D., a Graves’ eye disease specialist and renowned oculoplastics surgeon, initiated the study of thyroid-associated ophthalmopathy.

“The eyes are particularly susceptible to Graves’ disease because the autoimmune attack often targets the eye muscles and connective tissue surrounding the eye,” Douglas says. “This occurs as a consequence of these tissues containing proteins that are shared with the thyroid gland.”

The study, lasting 24 weeks and involving 88 patients, was the largest multi-center Graves’ eye disease trial. Patients were recruited between July 2, 2013 and Sept. 23, 2015, from 15 sites across the United States as well as Italy and Germany and the United Kingdom.

Study investigators examined the benefit of teprotumumab, a monoclonal antibody shown to inhibit IGF-1 function and was originally developed as a cancer drug.

Although teprotumumab failed to exhibit efficacy in patients with cancer, the team believed it might be useful in interrupting the TED disease process.

At the end of the trial, 69 percent of study patients receiving infusions of teprotumumab once every three weeks had reduced eye bulging (proptosis) and increased quality of life compared to 20 percent in the placebo group.

Patients were randomly assigned to receive either a placebo or an active drug. Neither participants nor researchers knew which medicine was being used so they could describe what happened in the trial without bias.

Some participants had results after two injections at week six when, according to the study, a reported 43 percent of patients in the treatment group compared to 4 percent in the placebo group had a response.

Those in the treatment group had a baseline Clinical Activity Score of 5.1. The marked reduction in proptosis is similar to the kind of results surgical patients would expect, authors note.

“The findings have implications for other autoimmune diseases in which IGF-1 reception has already been implicated such as rheumatoid arthritis,” Smith says.

The most common side effect of treatment was nausea. Muscle spasms and diarrhea were also reported, particularly among patients with gastrointestinal disease. The only drug-related adverse event was hyperglycemia in patients with diabetes; these events were controlled by adjusting medication for diabetes.

The results provide inroads for a new therapy to safely minimize the severity of the eye condition.

“The study is one of two pivotal clinical trials needed to achieve registration of teprotumumab as the first approved therapy to prevent TED symptoms,” says David Madden, president and chief executive officer of River Vision Corporation, which has entered an agreement to manufacture the drug with CMC Biologics in Copenhagen, Denmark.

The drug cannot be prescribed currently for TED patients. A follow-up clinical trial is underway, but not recruiting participants, and is expected to be complete in 2018.

River Vision sponsored the study and collaborated with academic researchers on the study design. Researchers received grants from the National Institutes of Health, Research to Prevent Blindness, the FDA’s Office of Orphan Products Development, and others.

For more information on research at the centre visit http://kellogg.umich.edu/research/