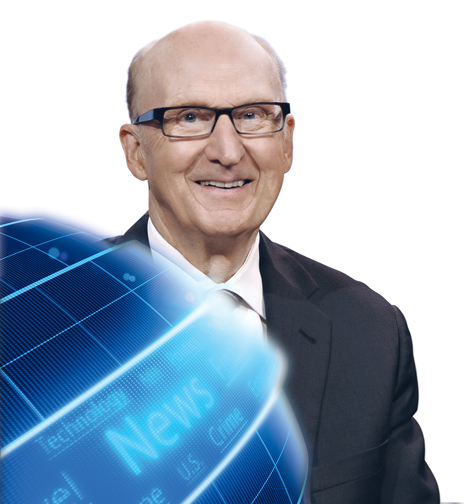 He has been providing Canadians with world news for more than 50 years. As Canada grew as a country both politically and on the world stage, award-winning Craig Oliver was there to report it. He has been the face of CTVs Question Period and a regular contributor to the nightly newscast.

Whether shedding light on the progress of the latest election campaign or adding insight on the words of Canada’s leaders, Oliver has been a trusted name in news.

What many viewers only recently learned is the 74-year-old broadcaster has had a near life long battle with glaucoma, a disease which slowly robs victims of sight.

The disease affects more than 250,000 Canadians and is the second most common cause of vision loss in people over 65.

Oliver first noticed something wasn’t right with his vision in his early 30s. He was working as an Ottawa bureau chief and at a point where his career was just beginning to take off.

“I started to notice large halos around lights,” said Oliver adding at first he thought he just needed a new prescription.

Doctors quickly realized it was something more serious after conducting field tests. Luckily the disease had been caught early, however, the outlook was still not positive.

“It has been a long haul ever since. It has been very gradual and I have had to get used to the various stages,” said Oliver. “The biggest is when you can’t read any more.”

Optic nerve damage caused by glaucoma prevents electrical impulses to the brain which produce a proper image. As damage worsens over time, the image becomes more difficult to make out.

“It’s largely a disease of aging, but it is also the primary cause of blindness in children,” said Oliver. “Many don’t realize their vision is declining.”

Oliver noted he was diagnosed during a time when little was known about the disease within the general public. He adds he first believed he had cancer because the resources available to those initially diagnosed were so limited in those days.

“I was pretty rocked. It was my first intimation of mortality,” said Oliver.

Glaucoma presents itself in many different forms, often with no pain or immediate vision loss. Over time it creates a sense of tunnel vision where the peripheral vision is reduced.

Oliver was required to take often painful eyedrops three times a day and by age 50 had lost his ability to drive. When first diagnosed, Oliver was new in his career and was worried he would not be able to continue to pursue his passion for news and journalism. This was particularly worrisome after he lost his central vision following surgery in his late 50s.

During his time with CTV Oliver has served in numerous capacities including director of news and current affairs, an early producer of Canada AM and as a Washington political correspondent.

Up until June of 2012, he served as the Chief Political Correspondent for CTV and co-host of Question Period. Perfect vision for any of these roles would seemingly be a requirement. Oliver did not allow his change in sight to determine his ability to continue to serve in any capacity with the network.

Oliver credits the digital age as being a positive resource for anyone suffering from glaucoma and similar eye diseases.

“It has been a transformation,” said Oliver. “It has allowed me to continue to read books and receive and send emails.”

Oliver notes though he has been delivering the news for more than 50 years, he has not been able to read a teleprompter for the last 20 years.

His countless years of experience and commitment to his craft has taught him to ad lib and memorize lines and still deliver a flawless performance.

“They have a very bright light that I look at so I know where the camera is,” he said, adding he just looks towards the light and delivers his portion of the newscast. “You carry on.”

He notes the Canadian National Institute of the Blind (CNIB) has also been diligent in creating a vast library for people with eye problems. Software tools such as JAWS, which provides text to speech services through computer software, has also allowed those suffering from eye conditions to continue to do the things they love.

Open source software and other media platforms are also making it more and more easy to continue to live a normal life and enjoy writing and literature including his more recent completion of his autobiography Oliver’s Twist.

Oliver said much of his ability to continue to do the things he loves is due in large part to the support he received both on the job and and at home. He added his colleagues would ‘cooperate with my idiosyncrasies’ and there was always a comfortable work environment.

“It’s important to be open and transparent and even be able to laugh about it,” he said. “When you are open and accessible about your visual handicap people are wonderful.”

He notes there are many things he does wish he could do like see his daughter’s face and appreciate a good movie. He had to give up his love of horse jumping and his participation in arctic canoe expeditions.

He joked he may never be able to land F-18s on carrier decks or be a paratrooper, but he is doing what he loves and that is what matters most.

He continues to support the CNIB through public service announcements and speaking engagements.

He adds he will continue to deliver the news as long as he is able, but has cut back on his hours slightly.

“I have signed up for another year with CTV, but I do one day less a week,” he said.