Cataracts linked to increased odds of depression in older adults 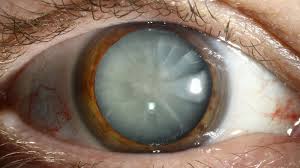 Older adults with cataracts are more likely to have symptoms of depression, reports a study in the December issue of Optometry and Vision Science, official journal of the American Academy of Optometry. The journal is published by Wolters Kluwer.

The link between cataracts and depression is independent of other factors, and appears strongest among older adults with lower education, according to new research by Haifang Wang, MSc, of Soochow University, Suzhou, China, and colleagues. They write, “[O]ur study sheds further light on the complex relationship between aging, vision loss, cataract, and depression and suggests that there may be a role for cataract surgery in improving mental health in the elderly.

Age-related cataracts are the leading cause of visual impairment worldwide and are expected to increase as population demographics shift towards advancing age. Depression is also common in older adults. This large study in Chinese older adults investigated the link between visual impairment and depressive symptoms and provides evidence for an association between cataracts and depression.

As part of a community survey study, approximately 4,600 older adults (60 years or older) in one Chinese town completed a depression questionnaire. Participants also underwent a clinical eye examination to rate the presence and severity of cataracts. Cataracts are a very common condition in older adults, with clouding of the lens of the eye causing vision loss.

Excluding those with previous cataract surgery, nearly half (49 percent) of older adults in the study had cataracts in at least one eye. On the depression questionnaire, 8 percent of subjects had depressive symptoms. Symptoms of depression were more common in women than men (11 versus 5 percent), and more common in older age groups.

The association between cataracts and depression was even stronger for subjects with no formal education–a 50 percent increase. After all other factors were taken into account, cataracts explained 14 percent of the variation in depression risk.

The researchers note that their study cannot show the direction of the association–vision loss might cause older adults to become isolated and withdrawn, or depression might make them less likely to seek treatment for cataracts.

“These results suggest that optometrists and vision care professionals should think beyond the direct effects of cataracts on visual impairment. We should also consider the broader impact that vision loss may have on mental health and well-being,” comments Michael Twa, OD, PhD, FAAO, Editor-in-Chief of Optometry and Vision Science. “As a next step, it would be important to know if the associated depression in older adults is reversible following the restoration of vision after cataract surgery.”