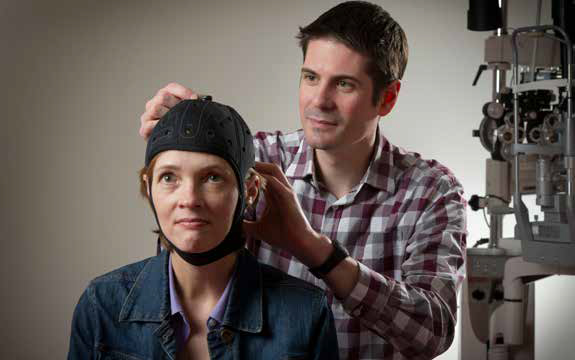 The University of Waterloo’s professor Ben Thompson has been awarded a $100,000 grant to continue his study into how non-invasive brain stimulation can help adults recover from visual disorders like amblyopia, also known as lazy eye.

The faculty member of the School of Optometry and Vision Science will receive the grant from the Canadian Institutes of Health Research.

Thompson tells Optical Prism that the one-year bridge funding will allow his team, which is working with Sun Yat-sen University, to collect preliminary data, using participants both with and without amblyopia, on the effect of the brain stimulation on a range of visual functions, including visual acuity and crowding.

The data collection process was to begin this fall.

“The results will help guide the design of a subsequent clinical trial,” he says.
“I am pleased and encouraged that the Canadian Institutes of Health Research chose to support this project. The funding brings us closer to achieving our goal of providing new treatment options for adults with amblyopia.”

Commonly known as “lazy eye,” amblyopia is a loss of vision that originates in the brain and is caused by abnormal visual experience during childhood. If a child develops an eye turn or one eye becomes long sighted, the brain begins to process information from the weaker eye incorrectly.

Once amblyopia has developed, even after the issue in the eye is corrected, the vision loss remains until the issue in the brain is fixed.
Treating amblyopia in children typically involves wearing an eye patch over their stronger eye to allow the brain to relearn use of the lazy eye.

But, according to the School of Optometry and Vision Science, reprogramming adult brains that have long passed out of the critical development period has proven more difficult.

“With currently no widely accepted treatment options for adults, amblyopia increases a patient’s lifetime risk for legal blindness by 50 percent.”

Thompson has discovered that non-invasive transcranial direct current stimulation, a form of low-voltage electrical current, can be effective in temporarily boosting the brain’s response to visual stimulation.

Their initial findings were published in scientific reports in 2016.