A Paw To Guide 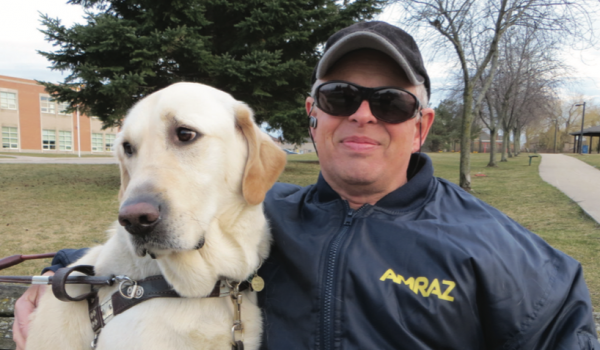 IT IS COMMON TO SEE A VISUALLY IMPAIRED PERSON WALKING DOWN THE STREET OR AROUND A SHOP WITH A GUIDE DOG. BUT THERE IS A SPECIAL BREED OF GUIDE DOG HALF A WORLD AWAY THAT IS HELPING TO BRIDGE THE GAP BETWEEN DISABILITIES AND CULTURES.
The Israel Guide Dog Center for the Blind (IGDCB) provides guide dog services similar to organizations like the Canadian National Institute for the Blind (CNIB), however, the organization, which is not a liated with the CNIB provides a unique service. All their dogs receive instruction in Hebrew.
This made a huge impact on the lives of countless people in Israel who prior to the organization being established, had to speak English and travel to other parts of the world to receive a guide dog.
The organization has branches in the United Kingdom, United States and in Toronto, Canada known as the Canadian Friends of the IGDCB. They are working with individuals, foundations and companies across the country to help support the training of these dogs.
Canadian Executive Director Ayal Lesh says life in Israel provides unique chal- lenges for both dog and owner.
“Israel is very crowded and there are lots of obstacles,” he said. “The sidewalks are lled with light posts, bins, trees and even cars. It’s very di erent from Canada.”
He said the dogs are trained to avoid these obstacles including ducking for trees and dealing with emergency situations such as air raid sirens.
“These dogs have incredible intelligence and temperament and the ability to learn and adapt,” he said. He added the dogs are placed with people throughout Israel including Jews, Muslims, Palestinians, Bedouin, and Druze.
It takes countless volunteer hours and approximately $25,000 over the lifetime of the dog.
Not all dogs end up being seeing eye dogs, those that don’t make it through that program may end up as dogs who assist with post-traumatic stress dis- order and helping people with issues such as autism and other therapeutic services.
Funds are raised at the Canadian branch through donations and bequests as well as through Mitzvah Projects where students learn about the program and share their time and experience afterwards with the congregations.
Countless personal donations from across Canada also help fund the pro- ject from individuals who see the ben- e t the program has to all citizens of Israel who bene t from being paired with a dog.
Arkady Balanovsky, who now lives
in Toronto, knows rst hand the life- changing impact this program can have on those who require assistance. Three years ago, Arkady began expe- riencing a drastic deterioration in his eyesight due to Retinitis Pigmentosa.
As his conditioned worsened, he was partnered with Batchi, a yellow lab/ golden retriever cross.
He also had to adapt his life from managing raw materials in a factory to training and learning to work with clients at a rehab clinic in Israel that provides massage therapy to mentally challenged people in wheelchairs.
“As a child I always loved dogs, but I was too busy with sports and other ac- tivities like music to have a dog—as I knew that you needed to have time to devote to a dog. When I lost my sight and learned about a guide dog, I was immediately interested. And now that I have Batchi, I can’t say enough good things about him,” he said. “He’s a big part of my life. He’s my best friend, who always wants to help me and please me. He’s with me all the time. And now I cannot imagine my life without a dog.”
Balanovsky noted there are many challenges for both owner and dog when they are rst matched.
“Batchi is my rst dog, so there were many things that I needed to learn— both about guide dogs and dogs in general,” he said adding it took a while to learn about his mannerisms and behaviour, and for Batchi to adapt
to his too.
“Now, we know each other well and feel what each other needs. We work
in harmony,” he said.
Assistance dogs are very aware of their job and do not deviate from their duties. However, Balanovsky says that Batchi is a playful dog too who loves to meet people.
“Perhaps that people think that guide dogs are all about work, but Batchi loves peopleandinteractingwithpeople,”he said. “He’s a dog, and when he isn’t working he loves to play and interact with people.”
He said since he met Batchi, he has learned that a person needs structure and order in their daily life, and Batchi gives him a sense of structure.
“I need to be organized and consistent with Batchi, to walk him, feed him, provide him with exercise and activity, and continuously perform commands,” he said.
A typical partnership lasts about 8
to 9 years but during that time both owner and dog experience an amazing bonding and growing experience.
“I’m increasingly impressed with
the intelligence of Batchi. Sometimes
when I play the accordion for my mother who is 85, Batchi will bring his fetch-toy to her, and he is very gentle, knowing her limitations as an elderly person,” he said.
Balanovsky says this program is incredibly important to those who require assistance and the support of people around the world changes lives every day.
“It’s very important—in fact vital— for someone to be able to communi- cate in their language of comfort,” he said. “ We need to be able to give many commands and often quickly. Everyone in Israel speaks Hebrew, so naturally our guide dogs are trained in Hebrew.”
He added supporters of the Israel Guide Dog Center may not realize that people who have guide dogs bene t far more than getting from one place to another. Guide dogs provide so much more to their part- ner’s—companionship, purpose, con dence, and greater ability for independent living and work lives.
To learn more or to support the program visit www.ca.israelguidedog.org